Why it's important to have savings, and budget

Funding cuts leave many without home heating assistance in Macon 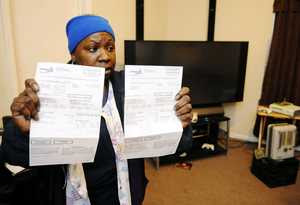 Showing her Georgia Power bills in the one warm room of her home, Raymeica Kelly explains how her mother, sister and herself were turned away from the Energy Assistance Program on Wednesday morning after standing in line for four hours. All three complained that the system the Macon-Bibb County Economic Opportunity Council uses to give out the assistance needs improving.

Notice the expensive large screen TV, and the gaming console underneath. I'd like to have those things too, but I don't. I also pay my own power bills, and buy my own heath insurance, etc. It wouldn't occur to me to expect anyone else to.

The article says this lady was employed, but then lost her job. Now she's employed again, but has fallen behind on her bills, and wants the government to pick up the slack. And of course if they do, she will then EXPECT the government to do so, every time she falls behind. That's human nature.

Her actual problem is, she didn't plan her finances well enough. When she was working, she should have been saving money in case a hardship like this came along. A hardship like this should, in fact, teach her that she needs to do so.

When I was young, I ran out of money between paychecks a few times. I went hungry for a day or two. It was awful, a hardship, but it taught me to be more careful with my spending. It taught me to SAVE money, so I wouldn't go through that experience again.

Saving money means spending less, and foregoing luxuries like Huge flat screen TV's and gaming consoles. You can even attain those luxuries too, eventually, by planning for them; but it means you can't get everything you want immediately.

In my youth I also got into credit card debt. It took me two years of frugal living to pay them off. By then I was good at frugal living, so I kept doing it and put the money in my savings account, until I had enough for a downpayment on a house.

To do that I had to make some sacrifices; no fancy vacations or clothes, hardly ever eating at restaurants, seldom going to movies. No new cars or expensive computers. But the sacrifices paid off in the end, helped me to get what I wanted, with planning.

By planning purchases I've been able to attain some luxuries too, over time. And maintain some savings. For most of my adult life now, I've always had some money in the bank, for unexpected expenses. You have to make sacrifices to keep savings, but you get security and independence in return.

Most people nowadays want instant gratification; they buy things on credit, and live from paycheck to paycheck, without saving anything. They spend their money on luxuries, then when something happens and they can't pay for essential goods or services, they want someone else to pay. They seem to think their security is someone else's responsibility.

I say, they need to learn from the hardship, and change their spending habits. I did, and I don't see why other people can't too. I sympathize with the suffering, but it happens for a reason. Shielding people from the consequences of their own poor planning just encourages them to keep planning poorly, instead of learning from their mistakes. And when our whole society perpetuates that, it drags us all down. We are meant to learn from hardship and use the contrast to make changes accordingly to improve our lives, to learn to make wise choices.