How does some one survive a fall like this? 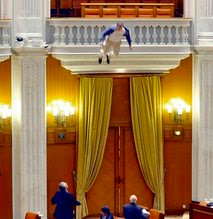 Romanian flings himself from parliament balcony

BUCHAREST, Romania – A man apparently distraught that budget cuts had reduced benefits for his disabled child dived more than 20 feet (about seven meters) from a balcony onto the floor of Romania's parliament Thursday, but survived and shouted "Freedom!" as he was stretchered from the chamber.

They didn't specify what the "other non life-threatening injuries" were. He's lucky to be alive, from that height. What the heck did he land on? There is a video at the end of the article, but if you try to watch it, it says that it's no longer available.