Reason.tv: Budget Chef Presents: How to Balance the Budget W/O Raising Taxes!

Using just a big piece of pork, a large knife, and a small knife, the budget chef shows how to balance the federal budget by 2020.

As a special treat, he does it without raising taxes from the current Bush-era rates!

It seems like a complicated preparation at first, but it's so simple that almost any elected official should be able to pull it off like a pro!

Domestic and foreign investors will love this, and it will also help create a stable environment conducive to long-term, sustainable economic growth.

Between 2011 and 2020, the Congressional Budget Office estimates that total federal outlays - for defense, agriculture subsidies, Medicare, Social Security, you name it - will total a whopping $42.1 trillion (in 2010 dollars). To bring outlays down to revenue, we need to cut a total of $1.3 trillion in total expenditures over the next 10 years.

That sounds like a really tall order until you realize that it cutting just 3.6 percent a year for each of the next 10 years. To put it in dollar terms, it means cutting about $130 billion a year from budgets that will average over $4 trillion.

That's not so hard now, is it? By making small, systematic cuts to a federal budget that is larded up with more fat than an Ponderosa buffet, we can balance the budget without even nicking essential services. [...]

The video is just a summary. It's based on a much more detailed article:

A value-added tax, a soda tax, a gas tax, banning earmarks, freezing a portion of federal spending at "pre-stimulus" levels - there’s no shortage of ideas being thrown out to fix the country’s disastrous balance sheet, which threatens not just near-term economic recovery but the possibility of long-term growth. Like last week's report from the president's Commission on Fiscal Responsibility and Reform, most of the current plans to fix the country's finances rely more on increases in revenues than on cuts in spending. In part due to its heavy reliance on revenue hikes, the commission, charged with balancing the budget by 2020, failed to win enough votes of its own members to present its recommendations to Congress.

Which raises the question: Can America really reduce its debt and deficit without raising taxes to job-killing rates or cutting essential services to developing-world levels? The answer is not simply yes, it's that we have to.

Raising government revenue - taxes - substantially is not only bad policy, it has proven difficult and ultimately unsustainable for any length of time in the past 60 years. Since 1950, annual government revenue, as a percentage of Gross Domestic Product (GDP), has averaged just below 18 percent despite every attempt to jack it up or tamp it down. Our post-World War II experience shows that if the government is going to live within its means, it can't spend much more than 18 percent of GDP. Period. 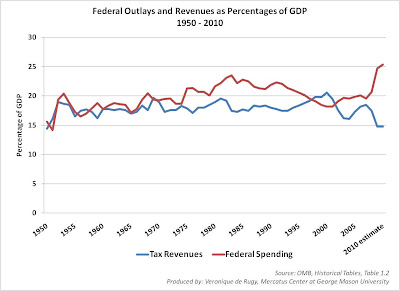 Which is one reason to be happy that the debt commission's recommendations won't be presented to Congress anytime soon. The report assumes revenue equal to 21 percent of GDP and struggles to get spending to "below 22% and eventually to 21%" of GDP. That’s a recipe for disaster that would guarantee deficits and red ink.

Similarly, former Sens. Bill Bradley, John Danforth, and Gary Hart, working with the Committee for a Responsible Budget, have offered up a plan to balance the budget by 2020 that relies on revenue hitting 20.8 percent of GDP, a level that hasn't been achieved once in the past 60 years. Republicans have not advanced any realistic near-term plans. Rep. Paul Ryan's (R-Wisc.) Roadmap to the American Future does not balance the budget until 2063. The pre-election GOP’s Pledge to America is worthless since it fails to provide specifics (and to the extent it does, it is no good).

The current situation is a bipartisan disaster that requires immediate action. Since Bill Clinton left the White House in 2001, total federal spending has increased by a massive 60 percent in inflation-adjusted 2010 dollars. In fiscal year 2010, which ended September 30, the federal government spent $3.6 trillion, or 25 percent of Gross Domestic Product. That’s the most spending, in terms of percentage of GDP, since 1946. Likewise, last year’s $1.5 trillion deficit, as a percentage of GDP, was the largest deficit since 1945.

Most economists talk about a debt-to-GDP ratio of 60 percent as a trigger point that makes investors very nervous about a country's ability to pay its obligations. The debt to GDP ratio was 63 percent this year and the Congressional Budget Office (CBO) projects it will be 87 percent in 2020. Just three years ago, it was 36.5 percent. Not good signs.

So, what would it take to bring federal spending into line with plausible levels of revenue?

The CBO, the non-partisan agency charged with estimating the effects of legislation on government costs, has produced a long-term budget outlook in which Bush-era tax rates remain unchanged. Their conclusion is that over the next decade, "government revenues would remain at about 19 percent of GDP, near their historical averages." That's actually a bit higher than the historical average, but is within the bounds of reason. [...]

There's a lot more. Read the whole thing, the original article also has many embedded links too. It's so refreshing to read about real, actual, REASONABLE solutions!