Discovery Returns to Earth. And Retirement. 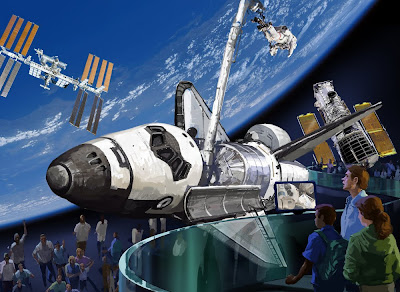 Space Shuttle Discovery's Next Destination: A Noble Retirement in a Museum

[...] Discovery is the first of NASA's three flying space shuttles to retire, and the most prolific of the trio. It has flown the most missions (39 flights), traveled the farthest (148 million miles) and carried the most astronauts (246 crew members) during its storied 27-year spaceflight career.

While Discovery is expected to go to the Smithsonian, there are about 29 museums currently competing for NASA's three space-flown shuttles, as well as Enterprise — a shuttle prototype used for landing tests, but which never flew in space.

The space agency plans to unveil the final destinations for Discovery and its sister ships Endeavour and Atlantis on April 12 — the 30th anniversary of the shuttle program's first flight. [...]

I heard on the radio that Discovery is still in good shape and capable of flying several more missions, but that won't happen because the programs been defunded.

Now they are going to spend 28.8 million on each shuttle, to turn them into museum pieces. I hope we got our monies worth.