The poor little beast! And what a shock for her owner: 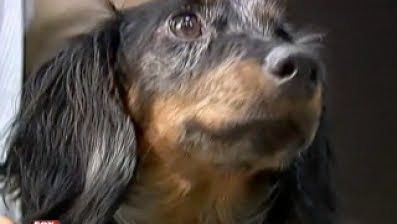 HYDE PARK, Mass.-- Fire destroyed Terisa Acevedo's apartment nearly one month ago. She was told that everything was gone, including her 2-year-old Dachshund named Lola.

But on Monday, when Acevedo, 24, went back to her apartment to tend to some business, she heard some scratching at the door, MyFoxBoston reports.

"I called out her name and she started crying. She's been in the house the whole time!" Acevedo said.

The amazing discovery led to a reunion that seemed impossible. Lola was found in the rubble of the apartment, which had been destroyed by fire. [...]

It says Lola's recuperating at an animal hospital now. She must have hid during the fire. Then to survive for a whole month, during a MA winter... the poor snookie. She's lucky to be alive.

This article says she went home today with her owner:

(NECN: Boston, Mass.) - A doctor at the MSPCA-Angell Animal Medical Center presented a healed-up Lola back to her owner on Thursday.

The veterinarian confirms Lola is in good health, but will be on a restricted diet for a few weeks while she gets completely back to normal. [...]