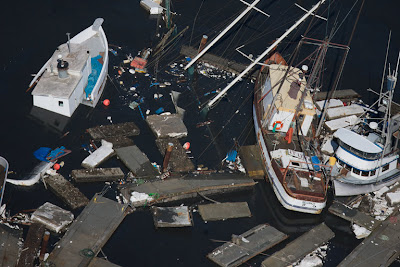 [...] The Port of Brookings Harbor sustained heavy damage Friday as walls of water flushed through the port area. Port manager Ted Fitzgerald estimated the damage to docks, pilings and port facilities at $10 million. That doesn't include the damage caused to and by boats, at least three of which sank in the basin. Many others were swept out to sea. Many of the boats that remained in the basin have suffered extensive damage when the waters send the 220-ton fishing vessel Haida careening through the marina. The boat's owner was unable to steer it because it was without its engine at the time.

"It was absolutely unstoppable. It happened at least three times, really hard," he said. "We had to keep taking it."

Chris Cantwell, the port's operations supervisor said 70 percent of the port's commercial basin was destroyed. "A third of our sports basin destroyed. We have boats on top of another. Probably half-a-dozen sunk," he told The Oregonian.

Cantwell said the first wall of water came in about 8:05 a.m. Friday. Three waves in all came in before 10 a.m. The third one inflicted the most damage. Cantwell said each of the waves was about 3 feet high.

"By the time the third one came in, things were loosened up," he added. "It was flipping boats on top of one another. We pretty much have a major disaster here." 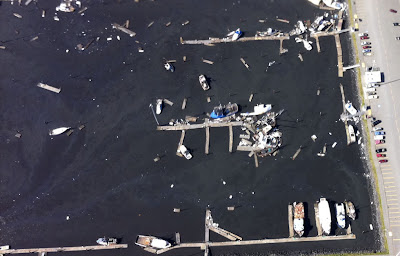 Brookings City Manager Gary Milliman said about 60 to 85 percent of the commercial dock is destroyed. Seven boats were swept out to sea, while several others sank or sustained severe damage, he said. The body of a man was also discovered on one of the boats, but the Curry County sheriff had told Milliman it is unclear whether the death resulted from the tsunami.

The port was without power as evening fell, with scores of local residents gathered to survey the wreckage.

Near Coos Bay, surges of water rushed in and out of the port, simulating a high tide and low tide cycle every 15 minutes, said Coast Guard Boatswain's Mate First Class Walter Morey.

"It did that like 12 times in three hours," he said. "It's pretty impressive to see this happen right in front of your eyes."

The water traveled at a fast clip as well, about three times the typical speed, he said.

Pilings separated from the docks, forcing a few boats to break loose of their mooring lines, he said. One dock broke completely away from the pier, with a sailboat attached to it. Coast Guard crews who assisted had to cut the mooring lines before the dock dragged the boat under the water. [...]

Read the whole thing for embedded links, more reports from other locations, more photos and a video.

There are also more links here:

As awful as it is, it's nothing compared to what Japan is going through. A very sobering thought.