What will it look like, especially with all the budget cutting going on? Space.com asked the question of some people who might know:

What Obama and Congress Should Do for Spaceflight & Space Exploration

Amid much wrangling over how to allocate funds out of an increasingly out-of-control federal budget, the editors and writers at eight of the TechMediaNetwork's sites sought the advice of dozens of researchers, technologists, futurists, analysts and business owners in fields ranging from space and Earth science to health and technological innovation.

We asked one simple question:

If you could ask President Obama and Congress to do one thing related to your field that would be for the good of the economy and the country, what would it be and why?

At SPACE.com, we asked respondents to focus their answers on space exploration and astronomy. Here are their replies:

"If America is to fulfill its highest ambitions in space, the country must focus its attention on lowering the cost of getting there. Less expensive space access — whether through novel technologies, better manufacturing or increased reusability — will make it much more likely that we'll be able to execute thriving exploration missions to Mars, the asteroids and the moon. Some experts believe that getting to space today costs essentially the same as it did in the 1960s. Breaking free of that plateau will save the taxpayers money, grow American jobs and allow us to achieve our dreams.
— George Whitesides
President and CEO, Virgin Galactic

The other responses were interesting, too. But Whitesides really made the best point, IMO. The costs have to be lowered, and free enterprise and competition will do that.

And speaking of competition, I didn't see Elon Musk, the founder of SpaceX, among the folks asked the question. His company has already created a working launch vehicle and reusable spacecraft, the Dragon capsule, that flew an unmanned test mission in December, and returned safely to Earth. 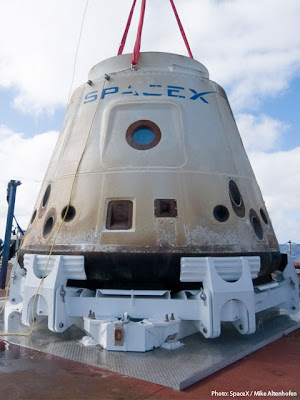 After the last space shuttle flight this summer, America will be without a manned space craft to take us into orbit. We shall have to rely on the Russians to ferry us back and forth, at great expense to us: $56,000,000.00 per ride. And the Russians plan to raise the price to $63,000,000.00 in 2014. A cost effective commercial alternative would be very timely, and greatly appreciated. Let the competition begin!