Japan: Before and After Satellite Photos 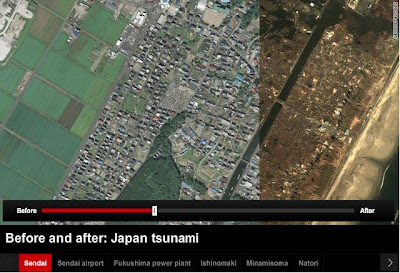 The tsunami's destruction: Before and after

If you follow the link, the site offers a series of photos with a scroll bar beneath, and the before picture is covered over with the after picture. The sheer enormity of the destruction boggles the mind.

Sendai, Japan (CNN) -- In a nation already besieged with grief over mounting casualties, fears of possible radiation and the threat of more earthquakes, thousands of bodies reportedly surfaced Monday, and a government official confirmed another explosion at a nuclear reactor building.

The official death toll reached 1,647 on Monday. But the numbers did not take into account the 2,000 bodies that Japan's Kyodo News said had been found in the hard-hit Miyagi Prefecture on Japan's northeast coast.

If confirmed, the discovery would be the largest yet of victims from the epic quake and devastating tsunami that hit Japan four days ago. [...]