Pelosi is determined to hammer her bill through before we can even read it: 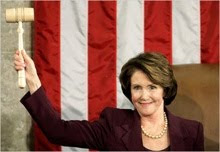 Democrats and the death of deliberative democracy

The House vote on Speaker Pelosi’s government health care bill is set for Saturday morning. She is scrambling to buy off recalcitrant Democrats on two of very issues that Rep. Joe Wilson and other House Republicans called out the White House for: abortion and illegal immigrant coverage. The wheeling and dealing is taking place behind closed doors. Once again, the Democrats who promised transparency are breaking their own promise to publish the final bill publicly 72 hours before the vote. [...]

The Democrats lied, and transparency died. When the Democrat leaders make promises, you can be sure they will just do whatever they want anyway, once they have power. They believe the rules don't apply to them, which is why they also disregard the Constitution, even though they have sworn to uphold it. It all means nothing to them; the ends justifies the means.

Today they plan to force a flawed and unsustainable healthcare system on us that they have exempted themselves from. Who the Hell do they think they are?

You can see live blogging of today's events here: