PelosiCare and the Amercian Constitution 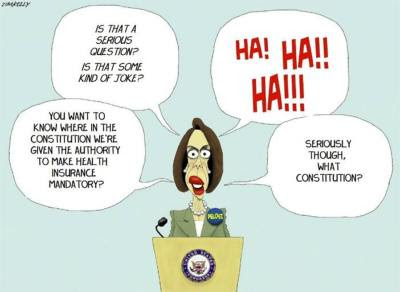 [...] The linked editorial touches on the legal argument with respect to the mandated purchase of insurance. I can’t fully comprehend the the gory details (I’m not a lawyer), but you see the unprecedented nature of the intrusion. Under what other circumstances do you become a criminal just for existing and failing to purchase a mandated item? By way of example, you’re compelled (by your state) to buy car insurance… but you made the choice to buy a car. Obviously you’re compelled to pay taxes…but then, this isn’t a tax; Obama promised not to tax you, so it can’t be a tax.

My main objection to health control is fear of the life-and-death power that government will ultimately hold over individual citizens, as well as looming national bankruptcy. Our Constitution was designed to protect us from such government overreach and centralization of power.

Precisely. PelosiCare is unconstitutional, AND unsustainable. What is the point, unless you want to ruin out current system of government and economics, and replace them with... something else?

SO ... SOME RANDOM THOUGHTS ABOUT PELOSICARE

You do know that you'll start paying the taxes immediately --- but that you won't start reaping the benefits for another four years or so, don't you? Quite the con there. They say that PelosiCare will only cost $850+ trillion dollars over the first ten years ... but don't tell you will only receive benefits for six out of those ten years. Wait till the next 10 years hits you in the can.

Thus far nobody has explained where in our Constitution it gives the Imperial Federal Government the power to jail someone for a period of five years for failing to purchase a health insurance policy. But what the hell does Nancy Pelosi care about our Constitution, anyway? [...]

Is there hope, as this bill moves to the Senate? I think so. Consider:

[...] Greater scrutiny will not help the Democrats' efforts. In truth, their hopes for passage largely hinge on successfully hiding two plain facts from the voters: One, the House Republicans and the Congressional Budget Office have now shown that a bill costing $61 billion can lower Americans' insurance premiums, while bills costing $1.7 trillion cannot (and instead would raise them substantially). Two, the Democrats' plans would be paid for only if they follow through on plans to siphon hundreds of billions of dollars out of already-barely-solvent Medicare, and to do so just in time for the baby boomers' retirement.

Given the magnitude of the challenge of continuing to hide these plain facts from an increasingly attentive citizenry, the Democratic health-care train has a very bumpy ride ahead — as it rolls into the chamber that the American Founders thought from the beginning would ultimately decide our fate: the Senate.

61 billion and lower premiums, versus 1.7 TRILLION and higher premiums? Which one do you think the majority of Americans would prefer?

I live in hope. And intend to do what I can to insure that saner minds in the Senate prevail.