What is Google's "Chrome OS" all about ?

When Google unveiled its open source Chrome OS on Thursday, many commentators were quick to dismiss the new operating system as unimpressive and underwhelming. Citing everything from the browser interface that represents the entirety of the user experience to its limited hardware support and inability to install apps or play PC games, early critics have slammed Google's cloud-based OS for being exactly what it is intended to be: lean, fast, and simple.

To my eye, all this criticism appears to miss the point of Chrome OS--and indeed, the point of most of Google's services. Of course, this is nothing new for Google. 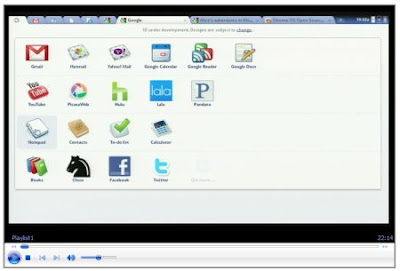 At the launch of the company's eponymous search engine in 1998, Google stood out from the pack of increasingly cluttered search portals with which it competed. In a time when leading Internet companies sought to become destinations by loading up their home pages with news, weather, entertainment links, shopping deals, and anything else they could think of, Google took a different tack by presenting a clean, white page with little more than a search field under the site's name.

I distinctly recall several colleagues scoffing at the simplicity of Google's home page at the time. Where were the news articles? The stock tickers? The pictures of celebrities? Why would anyone want a home page consisting of nothing but a search engine? Yet Google's pundit-defying search tool quickly became the home page of choice for millions of users worldwide.

Over time, Google rolled out additional services, including a few built to deliver the very services its home page lacked. But with every new service it launched, Google retained its characteristic simplicity, putting information--not splashy design--at the foreground.

Chrome OS is an obvious extension of Google's design simplicity, and it's no great surprise that many observers are unimpressed by the sight of it. It's little more than a Web browser. On first glimpse, it's nearly identical to the Chrome browser that's currently available for Windows PCs. And that's exactly what Google is going for.

The central principle behind Chrome OS is that the browser is the focal point for most computing tasks. So Google has put it front and center in Chrome, reducing the rest of the operating system down to a minimal Linux kernel that drives only the most essential hardware components for a Web-centric user.

Life in the Cloud

Google has designed Chrome OS as a platform for people who use computers primarily online, and the company is betting that many folks will happily trade their desktop apps for alternatives in the cloud. Naturally, this won't appeal to all users. I'd even say it won't appeal to most users, at least initially.

But multiple lines of evidence suggest that cloud services are the computing model for the future--a fact that even desktop-dominant Microsoft has embraced, as it prepares to roll out its Office Live services as a companion to its longstanding desktop suite (a companion that many savvy users will undoubtedly use in lieu of the desktop suite). What lines of evidence am I talking about? Enterprise adoption, device-agnostic work habits, and nearly constant wireless connectivity.

The article makes a pretty good case for Google's strategy. They were right before, and they may well be onto the next big thing here. If you find it interesting, I recommend reading the whole thing, the source article also has many embedded links.

Will Chrome OS merge with Android?