Soviet Walls, Islamic Walls... May They All Fall 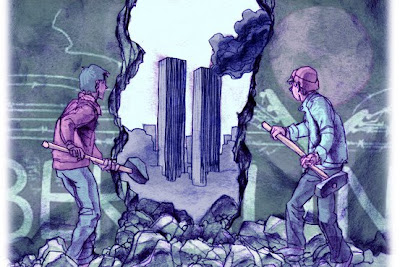 From Berlin to Baghdad
Will the peoples of Islam tear down their walls as the people of Central and Eastern Europe tore down theirs?

[...] A meandering road led from 11/9 to 9/11. The burning grounds of Islam are altogether different than the Communist challenge. There is no Moscow that serves as the seat of Jihadist power. This is a new kind of war and new kind of enemy, a twilight war without front lines.

But we shouldn't be surprised with some of history's repetitions. There are again the appeasers who see these furies of Islam as America's comeuppance, there are those who think we have overreached and that we are riding into storms of our own making. And in the foreign world there are chameleons who feign desire for our friendship while subverting our causes.

Once again, there arises the question in our midst of whether political freedom, broadly conceived, can and ought to be taken to distant lands. In the George W. Bush years, American power and diplomacy gave voice to a belief in freedom's possibilities. A different sentiment animates American practice today.

For the peoples of Islam, the question can be squarely put: Will they tear down their walls in the manner in which the people of Central and Eastern Europe tore down theirs? The people of Islam are thus sorely tested. They will have to show their own fidelity to liberty. [...]

But will they? CAN they? And how can we help?

Will Turkey bring Islam into the 21st century?