Dems "Not concerned" about the Constitution?

From their actions, I would say that's easy to believe. From Neal Boortz:

THE CONSTITUTION AND HEALTHCARE

When it comes to achieving the Democrats dreams and schemes, there is nothing that will stand in their way. Not even that pesky little thing called the Constitution. Republican Senator Orrin Hatch put it all in perspective recently. He does not believe that the Democrat plans for healthcare are justifiable. He says that if the federal government can force Americans to buy health insurance "then there is literally nothing the federal government can't force us to do."

Ain't that the truth?

First it is healthcare. Then what? What comes next for the Democrats to achieve their goal of making you more and more dependent on government? Orrin Hatch's point is that right now, the Constitution still remains a "barrier" for the Democrats. But if they get their way with healthcare, the levies will be broken. There will be nothing stopping them from trampling over what is left of our Constitution.

Not seriously concerned? What is there to be MORE concerned about than upholding the foundation of this country? Then upholding the Constitution. Didn't The Community Organizer take an oath to protect and defend our Constitution? And now he's "Not concerned"? And if you will remember, Nancy Pelosi had a similar response last week. When asked about the Constitutionality of her healthcare plan, she actually thought the reporter was joking. She chuckled, "Are you serious? Is that a serious question?" Yes, Nancy. Yes, Robert. Yes, Obama. We are serious. And it is about time you get serious too before you completely destroy what is left of this great country.

I'm sick of the blatant disregard for the constitution that these creeps have supposedly sworn to uphold. But then liars can swear to anything, because they don't mean it. And speaking of lies, I'm getting really tired of the often repeated lie that the Republicans have no health care plans to offer: 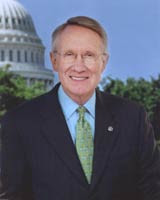 Harry Reid has some gonads. He is accusing the Republicans of not having any healthcare plans, when he himself technically does not have a completed healthcare bill to show the world. Last week, he sent off pieces of healthcare legislation for a CBO cost analysis. So the Republicans said they wanted to see the bill that he sent to the CBO. Well the truth of the matter is that this bill hasn't even been written yet. He is waiting for the CBO analysis to come back in order to decide which direction he wants to take. Then he took a shot at the Republicans for daring to request to see this elusive bill he submitted to the CBO. Reid said that the GOP health care plan "remains a secret, unless perhaps it does not exist." He goes on to say, "I fully understand if your plan is still under development, and would not presume to suggest that you publicly share draft legislative text for even an individual element of your plan, let alone an entire bill, before it is finalized."

Unfortunately for Harry Reid, the Republicans do have healthcare bills. Three of them. And they have been on the table since May and June of this year. CNSNews has the list:

In May, Republicans in the House and the Senate formed a bicameral coalition to produce the 130-page "Patients Choice Act of 2009."

And in July, the Republican Study Committee, under the leadership of Rep. Tom Price (R-Ga.), unveiled the "Empowering Patients First Act," a 130-page plan.

Harry Reid is desperate. So are his Democrat friends. They know that they are losing this battle to get their healthcare plans passed. So now they are complaining that the other side doesn't even have a plan. Shouldn't we be thanking these Democrats! Oh we should be so thankful ... at least THEY have come up with plans to take over 18% of our economy!

And they are readable sizes too, so they can actually be read completely before being voted on. Yet I have not heard about even one of these plans mentioned in the MSM. But I have heard the media often repeat the Democrats lies that these Republican proposals don't even exist.