How much longer will our Republic last? 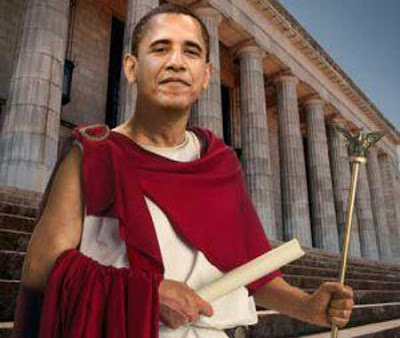 How committed is the Obama Administration to supporting Free Speech and upholding the American Constitution? It's awful to even have to ask that, but actions indicate we must:

The chairman of the National Endowment for the Arts, Rocco Landesman, provoked ridicule when he said last week that "Barack Obama is the most powerful writer since Julius Caesar." He didn't mean that Barack Obama is a literary titan who doth bestride the narrow world like a colossus while petty men like Chaucer, Shakespeare, and Tolstoy walk under his huge legs and peep about to find ourselves dishonourable graves. But what he did mean, while no less fatuous, is also disquieting in its implications: for the first time, the United States of America has a president whose supporters talk about him in the same effusive and worshipful tones usually reserved for the likes of Stalin, Mao, and Kim Jong Il.

At a time when the Obama Administration is relentlessly demonizing dissenting voices and manifesting a shaky (at best) commitment to the freedom of speech, this is hardly a reassuring message to send. It demonstrates once again this Administration’s utter tone deafness and apparent indifference to genuine concerns about its commitment to core principles of the U.S. Constitution – witness Nancy Pelosi’s incredulous response of “are you serious?” to a questioner who asked her about the Constitutionality of nationalizing health care. Hillary Clinton, meanwhile, has declared her opposition to attempts at the United Nations to criminalize “defamation of religions” – that is, to make it illegal to speak about the motives and goals of Islamic jihad terrorists. Yet the Obama Administration is sending decidedly mixed signals about its commitment to free speech. Several weeks ago the Obama Administration actually co-sponsored an anti-free speech resolution at the United Nations. Approved by the U.N. Human Rights Council on October 2, the resolution, cosponsored by the U.S. and Egypt, calls on states to condemn and criminalize “any advocacy of national, racial or religious hatred that constitutes incitement to discrimination, hostility or violence.”

Yet “incitement” and “hatred” are in the eye of the beholder — or more precisely, in the eye of those who make such determinations. The powerful can decide to silence the powerless by classifying their views as “hate speech.” And now the President of the United States has given his imprimatur to this tyranny. [...]

As our government continues to assume more and more powers and controls that it has been previously denied, and it's members fail to uphold the Constitution they have sworn to honor and defend, we must ask, where is this going, and where will this power-grab stop? WILL it stop?

It is now almost twenty years since the fall of the Berlin Wall and the end of the Cold War. But did it really end, and did we win it? Look at the situation in Europe today, where many of the former Communist countries in the eastern half of Europe are freer and safer than many of those in the western half of Europe. Instead of an Iron Curtain we now have an Iron Veil of Multiculturalism, and Western Europe is on the wrong side of it this time around. Did we trade the USSR for the EUSSR? If we really "beat" Marxism, how come Marxists and Leftists of all stripes virtually control Western media and academia a generation later, and why does the USA have a Marxist-inspired President Obama? [...]

Marxist ideology never left us. It just goes under different names and uses different methods now. Including "Hope and Change", and an increasingly Imperial US Congress.

Dems "Not concerned" about the Constitution?