"Angry and Bitter" are Obama's Specialties 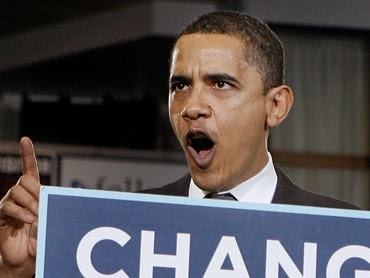 Once again we get a look at how Barack Obama really thinks, when he's addressing like-minded audiences in private. From the NY Times:

[...] At the fund-raiser in San Francisco last Sunday, Mr. Obama outlined challenges facing his presidential candidacy in the coming primaries in Pennsylvania and Indiana, particularly persuading white working-class voters who, he said, fell through the cracks during the Bush and Clinton administrations.

“So it’s not surprising then that they get bitter, they cling to guns or religion or antipathy to people who aren’t like them or anti-immigrant sentiment or anti-trade sentiment as a way to explain their frustrations,” Mr. Obama said, according to a transcript on the Huffington Post Web site, which on Friday published the comments. [...]

Now he's been criticized by Clinton and McCain for those remarks. His response? Arrogance:

I don't doubt for one minute that he believes he knows it all. He certainly acts like a Know-it-all. And I'm not surprised he sees anger and bitterness everywhere, since he attracts it and surrounds himself with it. If you want to see anger and bitterness, just look at his wife. Just look at his "God Damn America" church. Just look at the Democrat party these days, which seems to define itself by negatives. They NEED people to be angry and bitter, to get them to vote. Unfortunately, they also need to KEEP their base angry and bitter, to keep them voting. Thus, they never solve the purported problems of their base; they just posture and stoke the anger, to help keep the Democrat fund raising machine rolling.

Pat commented on his blog about Obama's controversial remarks:

Obama just lost any Blue Dogs Democrats he had

[...] It was not a "problematic judgment call." Obama was in his element among the San Francisco elites. That's the way he and they think. That's why they love him. When I first moved to San Francisco I was told that everything east of Berkeley is populated by gun-toting, bible-thumping redneck troglodytes. No wonder Obama banned the press from the San Francisco fund-raisers.

Exactly. I had also commented on the the fund raising visit, because having lived there for 23 years, I know the people and political climate quite well. Obama knew exactly what he was saying at the fundraiser, because he understood who he was saying it too.

It seems his arrogant approach to defending his remarks didn't fly so well, so now Reuters is trying to help him spin it:

Obama says he erred in comments on "bitter" voters

[...] "I didn't say it as well as I should have," said Obama, who is vying with Clinton for the Democratic nomination and the right to run in November against presumptive Republican nominee McCain.

Obama said he believed many voters were indeed bitter about the economy and he meant to say "when you're bitter you turn to what you can count on."

"So people -- they vote about guns, or they take comfort from their faith and their family and their community," he said. But he said he had not meant to imply that was a bad thing.

"The truth is that these traditions that are passed on from generation to generation, those are important. That's what sustains us," he said. [...]

Well that's one way to spin the remark about "clinging" to religion and guns. But I'm not buying it. He didn't mean for it to sound like a bad thing? Consider the rest of the remark he made at the fund raiser: "... antipathy to people who aren’t like them or anti-immigrant sentiment or anti-trade sentiment as a way to explain their frustrations," Basically, he's saying the white working class of Pennsylvania are racist people who are frustrated by their own ignorance.

Now consider the audience he was saying it to. "Everyone" in San Francisco knows that ignorant racist people "cling" to guns and religion. That's why "enlightened" people like San Francisco's socialist elites believe guns need to be pried out of those clinging hands, and "ignorant" religious beliefs need to suppressed, or better still, banned.

Obama knows who he was talking to. His remarks were meant for them, not the press. In San Francisco, people are always talking about how ignorant, racist and greedy the rest of America is. They complain about how the rest of America has too much freedom, because ignorant people don't know what to do with freedom, and therefor shouldn't have it. They need RE-EDUCATION. They need to be TOLD what to do and MADE to do the "right" things.

At best, Obama was pandering to them. At worst, he agrees with them, and didn't give what he said a second thought, because it was behind closed doors to like-minded people. I tend to think the later is the case.

He can try to spin it all he wants, about how he didn't mean what he said. The San Francisco elites will forgive him. I'm sure they are now all telling each other, "Poor Obama, he HAS to make excuses and pretend he made a mistake, because the rest of America is dominated by ignorant racist redneck bible thumpers. I know he doesn't really mean it, but he HAS to say he was misunderstood, so he can WIN".

Yeah, the ends justifies the means. Tell'em anything, just get the power.

Are the Obamas just black Clintons? Bill Clinton could deliver some pretty good speeches. Thus, the Clinton's were able to overcome the Democrats negativity problem by feigning optimism, although over time the negativity and ugliness it was covering became apparent. The lies and the cynicism showed.

Obama may seem positive with his shallow "Yes we can" slogans and speeches, but when you dig deeper, it's really just the same tired ideas, methods and Democrat misanthropy that the party has been suffering from for years. Where is the "change" we hear so much about? It's still the same old crap the Democrat Party has been shoveling for decades. The stuff that doesn't DO anything, except keep people angry and voting Democrat.

Not only does he feed on bitterness and resentment, he's arrogant enough to believe that anybody who disagrees with his positions on controversial issues like gun control or illegal immigration is simply expressing frustration about not being paid enogh attention.

I just posted an interpretation of his backpedaling speech in Muncie, Indiana, on my blog, called Daddy Obama Understands

Excellent post! Of course he can't even see how patronizing he's being, and why many people find it insulting.

I also find it ironic that Obama, who claims to have religious faith, can actually refer to other religious people as "clinging" to their faith. It makes me think that Obama's reasons for attending church have nothing to do with faith, and everything to do with politics. It reveals a disingenuousness that I find disturbing.

Well, Barack Obama is truly a man of mystery. He's much more complex than he would appear to be. And that complexity is disturbing -- not because he's complex (most interesting people are), but because he goes to such great lengths to conceal that complexity. Of course, maybe it's just all politics. Maybe he just happens to be a particularly smooth talking, charismatic politician who understands the need to reveal as little as possible about himself to present as narrow a target as possible to his opposition. So far, that's worked pretty well.

That's the best case scenario. The worst case scenario is much more ominous. In any case, what we know about Obama is that we don't know much, -- and he prefers it that way.