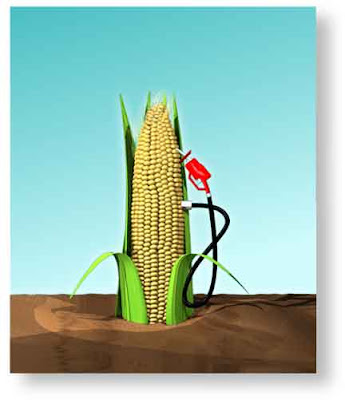 What Happens When You Put Food Into Cars

When Ronald Reagan said "The government isn't the solution, it's the problem", he wasn't kidding. Ethanol is a prime example.

The Democrats are especially good at creating "solutions" that create even more problems, that in turn, require even more government. But this ethanol scam went through with the help of Republicans, who "felt" the need to "do something" in response to the global warming hysteria, instead of sticking with good science, reason and the known facts. This foolishness is the result of responding to hysterical hype.

Now the Democrats will use rising food prices as yet another reason to turn Republicans out of office, when in reality it was the Democrats who pushed hardest for the ethanol program. Yet it will be the Republicans that the MSM will blame.

The best thing the Republicans could do now is reverse this bad decision, but will any of them have the guts to do it, lest they offend the adherents of the Global Warming Religion?

Alternative Energy and the Law of Unintended Consequences

[...] Our national “investment” in subsidizing bio-fuel production has been so overwhelmingly successful that it’s had the effect of repurposing the majority of our corn crops to ethanol production. It has also motivated farmers to divert production from other crops to crops that can be used for biofuels.

Unfortunately, the unintended consequences of this noble effort have been to raise food prices, not only here in the U.S., but around the world. Rising food prices hit the poor the hardest, and accelerate the spread of poverty. In an article in Foreign Affairs, titled How Biofuels Could Starve the Poor, authors Runge and Senauer said ”Filling the 25-gallon tank of an SUV with pure ethanol requires more than 450 pounds of corn - which contains enough calories to feed one person for a year.” Even as food shortages increase in countries where people are already starving, the U.S. is being forced to reduce its international food aid due to rising food costs at home, largely due to the diversion of crops to biofuel production.

The high demand for biofuels is also having an unintended impact on some of the environmentalists’ own pet causes. [...]

This article also goes into detail about the harmful effects of diluting gasoline with 10% ethanol, and the many other unintended harmful side effects of the Ethanol Boondoggle. Read the whole thing... and weep! Then demand that our politicians not only stop this nonsense, but reverse course before the damage spreads further.

It's a conundrum. The global warming hysterics are always promoting alternative energy sources. But then the alternative energy sources turn out to have even more politically incorrect consequences than oil. Windmills slice and dice birdies and hydroelectric dams make the fishies impotent. So, as soon as the envriros get what they want, they turn around and start protesting it.

The ethanol debacle turns out to be much more harmful than wind or hydroelectric power, because it affects people, not just birds and fish -- although, from an enviro perspective, that probably makes is not as bad...

I posted a blog entry on this last month, called Alternative Energy and the Law of Unintended Consequences. The lefties were quick to divert the blame to agribusiness and call me colorful names for daring to suggest that they blew it big time on this. But then we all know lefties can't handle taking responsibility for anything...

The leftists that are pushing Global Warming aren't really interested in the environment at all. It's really about being anti-capitalist, but they dare not be honest about that, so they hide behind any cause they can convert to their purpose.

So of course any alternative energy source that starts serving the establishment also comes under attack as unworthy, because it no longer serves the purposes of the the anti-capitalist left.

Thanks for the link to your article, I've amended my post above to include it, because it explains the many ways the ethanol scam not only fails it's purported purpose, but also does a lot of harm in many other areas as well.

I can't believe this irrational "feel good" crap was ever implemented. It's worse than incredibly foolish, it's actually harmful, and must be stopped.

Chas, you're absolutely correct about the anti-capitalist agenda of the enviros. In the Preface of the seminal neo-environmentalist treatise Man and the Biosphere: Toward a Coevolutionary Political Economy it says "a major obstacle to its development has been the orientation of economic analysis on the narrow conceptualizations of the self-regulating market rather than on multilevel forms of socio-technico-Biospheric planning." (Take that, you evil free market capitalists!)

Apparently, the only way to truly put an end to horrors of global warming is through the redistribution of wealth...

Funny how "redistribute the wealth" is their solution to just about everything. One answer that fits all problems!