Even after a grueling re-entry and rough landing, they all appear to be well: 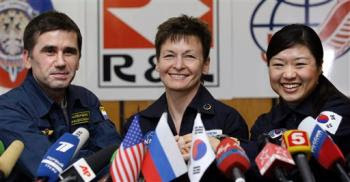 STAR CITY, Russia (AP) — South Korea's first astronaut said Monday she was "really scared" when the Russian space capsule she was in made an unexpectedly steep descent to Earth over the weekend.

"During descent I saw some kind of fire outside as we were going through the atmosphere," said Yi So-yeon, a 29-year-old bioengineer. "At first I was really scared because it looked really, really hot and I thought we could burn."

But then she said she noticed it was not even warm inside the Soyuz capsule. "I looked at the others and I pretended to be OK," Yi said.

The technical glitch also sent the TMA-11 craft off-course and it landed about 260 miles from its target on Kazakhstan's barren steppe.

All three members of the crew walked slowly and were unsteady on their feet Monday when arriving for the news conference at Russia's Star City cosmonaut training center outside Moscow.

Malenchenko said it was not yet clear what caused the unusual descent.

(bold emphasis mine) Interesting. Previously, a spokesman at the Russian Mission control said that the Soyuz crew failed to notify them of a change in flight path and trajectory. Now the pilot, Malenchenko, says the crew had nothing to do with it. Whatever the problem was, thank goodness it didn't kill or injure them.

You can read more details about the re-entry here: