Is John McCain the ultimate centrist? 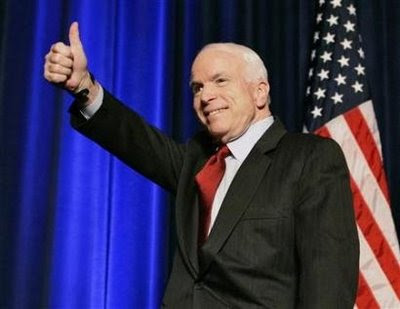 There are various groups, on both the left and right, that endorse senators based on their voting record in the Senate. But each group tends to only select the issues that are most important to that group, and use that as the ruler to measure the candidates worth to the group. That's fine. But what happens if the ENTIRE record is taken into consideration? From Fox News:

McCain in the Middle?

[...] There are a number of organizations on the left and right that evaluate congressmen and senators on how they vote each year. These conservative and liberal groups pick the votes that their fellow liberals or conservatives most care about and figure out what position best supports their own views.

Two well-known organizations that rank congressional voting are the American Conservative Union on the right and the Americans for Democratic Action on the left. There also is the League of Conservation Voters, which ranks politicians from a liberal environmentalist position.

These three rankings from 2001 to 2006 paint a fairly similar picture, putting McCain to the left of most Republicans and to the right of most Democrats in the Senate, though usually much closer to the average Republican. [...]

You can read the rest of the article for a further detailed breakdown. I realise he isn't the ideal of what many conservative Republicans want. I also disagree with him on several issues; he was not my first choice. But the more I consider the larger picture, the more it seems like he might be the IDEAL choice for THIS election.

I normally prefer Governors over Senators for presidential candidates, but they are all Senators this time. None of them are perfect. But both the Democrat candidates have way too many negatives for me. John McCain has a long history in the Senate, a very good record on many conservative issues, and fortunately he's extremely well-connected politically, and has a broad appeal to moderates in both parties.

NOT TOO EARLY FOR A PREDICTION ...

He gives some excellent reasons why, and I agree. McCain has so much going for him in comparison to the competition. On a good day, when I'm feeling optimistic, I think it very likely that John McCain will win. It's not a certainty, but he has a lot of things going for him that no other Republican candidate would have. He enjoys a broad appeal among moderates and independents, and I think they may well decide this election. I'm going to do my part in the coming months, not only to hold on to my optimism, but expand and share it too.