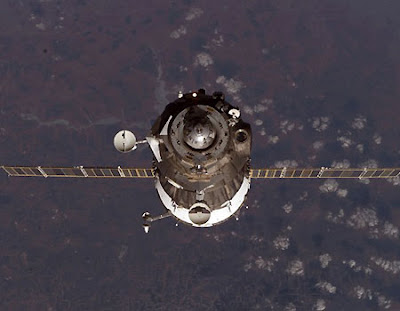 A new crew has taken over the ISS, and the old crew returned to Earth, but not without some problems. From NASA:

HOUSTON – NASA astronaut Peggy Whitson, the first female commander of the International Space Station, returned to Earth at approximately 4:30 a.m. EDT Saturday, ending a mission during which she conducted five spacewalks and set a new record in American spaceflight.

Whitson and Russian cosmonaut Yuri Malenchenko, members of the 16th crew to live and work aboard the station, safely landed their Soyuz spacecraft in the steppes of Kazakhstan. Spaceflight participant So-yeon Yi also returned to Earth aboard the Soyuz. The landing was approximately 295 miles from the expected landing site, delaying the recovery forces’ arrival to the spacecraft by approximately 45 minutes. [...]

Now the astronauts are OK, but it hasn't yet been determined what went wrong. This next report, from the associated press via Fox News, has some interesting remarks:

It was the second time in a row _ and the third since 2003 _ that the Soyuz landing went awry.

Mission Control spokesman Valery Lyndin said the condition of the crew _ South Korean bioengineer Yi So-yeon, American astronaut Peggy Whitson and Russian flight engineer Yuri Malenchenko _ was satisfactory, though the three had been subjected to severe G-forces during the re-entry.

The Russian TMA-11 craft touched down at 4:51 a.m. EDT about 260 miles off target, Lyndin said, a highly unusual distance given how precisely engineers plan for such landings. It was also around 20 minutes later than scheduled. Search helicopters then took 25 minutes to locate the capsule and determine the crew was unharmed.

Officials said the craft followed a so-called "ballistic re-entry" _ a very steep trajectory that subjects the crew to extreme physical force. Lyndin said the crew had experienced gravitational forces up to 10 times those on Earth during the descent.

The crew were being examined on site by medical officials, and were later to return to Moscow for further evaluation.

"The most important thing is that the crew is healthy and well," Federal Space Agency chief Anatoly Perminov told reporters. "The landing occurred normally, but according to a back-up plan _ the descent was a ballistic trajectory."

Perminov said engineers would examine the capsule to determine what caused the glitch, though he blamed the Soyuz crew for not informing Mission Control about the unusual descent.

Later, Perminov referred to a naval superstition that having women aboard a ship was bad luck when asked about the presence of two women on the Soyuz.

"You know in Russia, there are certain bad omens about this sort of thing, but thank God that everything worked out successfully," he said. "Of course in the future, we will work somehow to ensure that the number of women will not surpass" the number of men.

Challenged by a reporter, Perminov responded: "This isn't discrimination. I'm just saying that when a majority (of the crew) is female, sometimes certain kinds of unsanctioned behavior or something else occurs, that's what I'm talking about." He did not elaborate. [...]

(bold emphasis mine) I bet someone's going to have some fun with those remarks. It will be interesting to see what the final report says.

Then there is this from a Reuter's reporter at Canada.com: 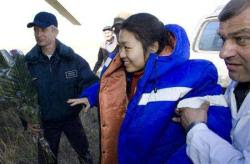 A Reuters photographer, who traveled to the landing site in a helicopter with rescue crews, saw plumes of smoke rising from the capsule, which was lying in its side stamped about 30 cm into the ground with its parachute burning.

The photographer said the U.S. astronaut looked pale and was not fit enough to take part in a brief news conference. He said the Korean and the Russian looked fine as they traveled in a helicopter from the site to the Kazakh city of Kustanai.

He said the Korean had been dozing in the helicopter most of the way back to Kustanai but started smiling and made a flower drawing on the wall after she was served tea and had her blood pressure measured.

"Even though it is a very small place you can float back and fourth under each other, over each other," smiling Yi So-yeon told in English of her experiences in zero gravity environment at the International Space Station.

Russian space officials back at mission control in Moscow had waited nervously before confirmation came that all three were safe and their health was satisfactory. [...]

Peggy Whitson is 48 years old. It was her 2nd mission in space, and she had been living in zero gravity since October. It probably made her weaker than Yi So-yeon who is 29, and who had only been up there for a short time. Whitson had said before she returned that she wasn't looking forward to dealing with the gravity; I think she was anticipating it would be difficult for her. Yuri Malenchenko is 46, he had been up there as long as Whitson had. But he's also a Russian Air Force colonel as well as a seasoned cosomonaut, and no doubt very tough. It's a heck of a way to travel, for anyone at any age.

The Soyuz space crafts have been pretty reliable, but they are not reusable. The Americans are building a new capsule spacecraft called Orion, that will replace the space shuttle in 2010, and will be also used for Earth re-entry for Lunar and Mars missions. It will most likely be re-usable, but there is still some debate going on about that.