Obama's wife's remark about not being proud of America was no surprise to me. I would guess that in the circles they move in, that kind of remark is a built-in assumption that no one gives a second thought about. Socialists are discontented with America the way it is, and want to bring about "change". Drastic change. From Michael Schuyler at Blogs for McCain:

Is Barack Hussein Obama even on America’s Side?

[...] Obama is not just a ‘left wing liberal’ in the mode of Ted Kennedy. He’s way further left than that. He’s not just socialist-leaning, either. He’s way further left than that. He’s the kind of leftist who thinks Cuba, the USSR, North Korea, and China are good where the United States, England, France, and Singapore are bad. This is a guy who has in the past embraced the race-based politics of Chicago’s south side and come perilously close to embracing, and certainly was sympathetic to the Black Muslim politics of Elijah Muhammad. In short, Barack Obama is a very nice, refined, and appealing Malcolm X.

(bold emphasis mine) Most schools teach students to NOT be patriotic; that it's actually wrong to feel patriotism. I think the Obamas have been cultivated in that rarefied atmosphere of leftist academia, where such things are taken for granted. Many of the youth of our nation have been taught the same beliefs, and thus feel Obama is "correct" for feeling the same way. To them, it's all part of the wonderful wave of "change" that's supposed to sweep the nation.

Yet the concept of "change" is by itself very vague. It's not necessarily good; things can change for the worse as well as better, which is why it's important to be specific. Obama keeps saying we all need to make sacrifices. What exactly does that mean? The same old socialism that the Democrats try to push in every election would be "change" too. So what is he pushing for? 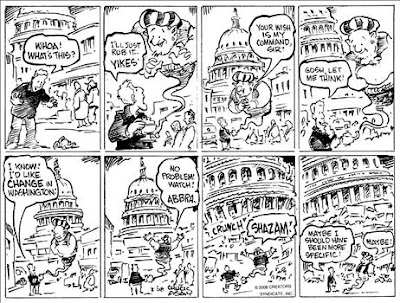 Making vague feel good speeches is a useful tool for a politician, but it isn't enough, or at least it shouldn't be. Bill Clinton made great speeches too, but in the long run the Clinton's horse and pony show was shown to be a superficial cover for a record-breaking corrupt presidency.

Barak Obama, like all the candidates, needs to be closely scrutinized. Questions need to be asked, and answers found. If the MSM won't do it, we need to. Here's a good question:

Is Obama a red diaper baby?

Don't know what a red diaper baby is? Follow the link and find out. Let the scrutiny begin.