I read that as many as 40% of evangelicals voted for Mike Huckabee in the primaries. I haven't been able to confirm that number, but it would seem that a significant number of evangelicals have split from what used to be called the Reagan Coalition. It seems they want something different from what past Republicans have offered them so far.

WASHINGTON - Republican John McCain, more than halfway to his party's presidential nomination, told his conservative critics Wednesday to dial back their animosity and personally reached out to a leading Christian conservative.

"I do hope that at some point we would just calm down a little bit and see if there's areas we can agree on," McCain said at a news conference in a Phoenix airport hangar before he flew here.

The Rev. Jonathan Falwell, son of the late Rev. Jerry Falwell who made the religious right a political force when he founded the Moral Majority in 1979, disclosed Wednesday that he had a telephone talk with McCain within the past 24 hours. Falwell, who succeeded his father as pastor of Thomas Road Baptist Church in Lynchville, Va., said he wasn't ready to endorse a candidate but wanted to hear more from the Arizona senator on the issues.

"I look forward to seeing what McCain's plan is to unite the party," Falwell said, "and to see what he has to say in the coming days on the social agenda." He also expressed interest in hearing more from McCain on national security, the economy, Supreme Court nominees, and "how to protect human life and traditional marriage."

Falwell said McCain's call was the culmination of a couple months of contact he has had with McCain's staff.

McCain had a falling out with Christian conservatives during his 2000 presidential campaign when he called the elder Falwell and religious broadcaster Pat Robertson "agents of intolerance." But McCain made up with the elder Falwell in 2006 and spoke to graduating seniors that year at Liberty University. The school was founded by the elder Falwell and is now run by Jerry Falwell Jr., who last November endorsed McCain's rival, Mike Huckabee, himself an ordained Baptist minister. [...]

(bold emphasis mine) So McCain kissed and made up with Jerry Falwell before he died, and now he's meeting with Falwell's son and heir, Jonathan. Jonathan's older brother, Jerry Falwell Jr., endorsed Mike Huckabee. Hmmmm... 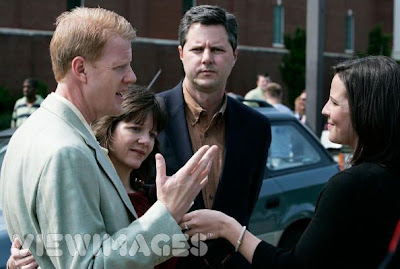 I believe it's Jonathan on the left, and Jerry Jr. in the center.

[...] He said he has no plans to reach out personally to Limbaugh or Focus on the Family founder James Dobson, but emphasized: "Our message will be that we all share common principles, common conservative principles, and we should coalesce around those issues in which we are in agreement and I hope respectfully disagree on a few specific issues there's disagreement on."

He later told reporters aboard his campaign plane: "I'm aware there's a very fine line between inspiring in unity and pandering. You know, you've got to present it in the right way, of course."

The conservative critique of McCain escalated Tuesday when Dobson released a statement saying: "I am convinced Senator McCain is not a conservative, and in fact has gone out of his way to stick his thumb in the eyes of those who are." Conservative author and commentator Ann Coulter has said she'd vote and campaign for Democrat Hillary Rodham Clinton if McCain is the GOP nominee. Limbaugh has said a McCain nomination would destroy the Republican party. [...]

Destroy the Republican party? It sounds like McCain realizes the party is already split and floundering, and he's going to try to pull together a new coalition. But it will not be the Reagan Coalition. I think he recognizes the Huckabee evangelicals discontent, and their unwillingness to vote for Mitt Romney. At this point, he's not interested in reaching out to conservative critics like Limbaugh and Dobson, who were Romney supporters. Actually I don't know if Dobson supported Romney, but he sure didn't support McCain.

James Dobson, one of the nation’s most prominent evangelical Christian leaders, backed Mike Huckabee’s presidential bid Thursday night, giving the former Arkansas governor a long-sought endorsement as the Republican field narrowed to a two-man race. In a statement first obtained by The Associated Press, Dobson reiterated his declaration on Super Tuesday that he could not in good conscience vote for John McCain, the front-runner, because of concerns over the Arizona senator’s conservative credentials. [...]

Dobson is concerned about McCain's conservative credentials? But he apparently has no concerns about these credentials of Huckabee's:

Why Huckabee is NOT a good GOP candidate

Some of us can read, and we read more than just the Bible. Some of us understand what party politics is about, how it works and how and why we need to form alliances and work within the Republican party, so we can actually win elections and have a voice that matters. Smart evangelicals know and understand this.

John McCain is trying to form a new coalition and bring the party together. If Huckabee and his supporters like Dobson continue to divide the party, they may find they are no longer part of it. Perhaps that would not be a bad thing.

While I fully understand the angst of Conservatives in their policy opposition to John McCain blunders like Illegal immigration, Conservatives are beginning to amaze me in their inability to see the larger picture.

While I also disagree with McCain on a dozen issues or so, the alternative is not just four years of 'sitting it out' as some have proposed.

Many talk radio hosts have battled a McCain nomination. Even Focus On The Family Director Dr. Dobson (who I admire ) has declared his refusal to vote for McCain.

This astonishes me because it’s the same as saying “if we don’t get the conservative I want, We’ll let the country go to hell in a hand basket.”

This, in my opinion is very dangerous and makes our future prospects harder - since our children will be growing up in the aftermath of such a decision.

Anti McCain pundits and commentators such as Rush Limbaugh have ventured the idea that perhaps we should sit this election out and let the Dems have a term in office, claiming it might pave the way for a future shot at a candidate he and others will like in four years.

While I understand these expressions of dismay, I think it’s shortsighted. Imagine the damage our country will endure if Democrats control all three branches of government for 4 to 8 years. .

This would give liberals what they will treat as a clear sign from America that is it ready to move sharply to the left. Conservatism will lose most of it’s teeth and the liberal agenda could easily reverse all of the progress we’ve made in the war on terror, Tax reduction, Pro Life, and other extremely important issue.

We can always address the issue of immigration again in 4 years. What we cannot afford to see happen is a liberal agenda that makes illegal immigration the least of our country’s problems. Our country may be so torn up, it won’t have the time to even visit the issue, like we can today.

There is no such thing as a quick recovery from 4 years of liberalism unchecked. We may be facing what will take years and years of damage to undo. What’s more, there’s no guarantee that it WILL be undone. The passage of even one single liberal law is extremely difficult to outlaw - as if Roe V Wade hasn’t taught us this already!

Rush Limbaugh and others may revel in 4 years of liberal destruction as a talk radio host who can use the material, however all it takes is one liberal judge appointed to the Supreme Court to unravel the one ace we’ve achieved in the last 8 years. This doesn’t occur to me as a smart decision for Conservatives to be making..

As Evangelical Conservatives know, Pride cometh before the fall, and I hope they will study that verse before deciding to approach this election with dismay rather than enthusiasm.

Questioning McCain was right and highly useful for a time and a season. But there are greater threats looming on our horizon than John McCain.

It’s time to put our differences aside and get with the business assuring our children, they will not grow up in a socialist, liberally dominated world. This may be our cross roads, and it is certainly no time to be staying home on Election Day.

What you say makes perfect sense to me. Look at all the damage Jimmy Carter did in just four years. With old judges, open borders, the WOT... there is too much at stake right now to let the Dems just have it all. If we do, we may never recover.

I just amended this post with an update: Dobson has endorsed Huckabee to spite McCain. That's like cutting of your nose to spite your face.

A new Republican Coalition is trying to form, and we need to work with John McCain to make it happen. That's what I intend to do.