There will be a Full Lunar Eclipse Tonight 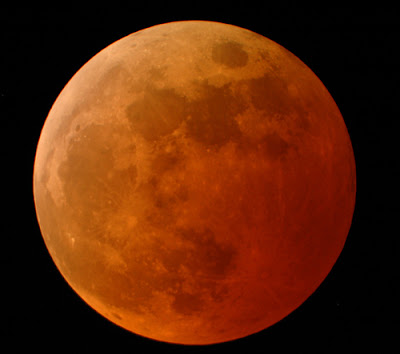 It's supposed to be visable from all locations in North America, weather permitting. Here in Oregon though, the eclipse will begin just before the moon begins to rise above the horizon. By the time it rises above our tree-line, it will already be well into it. It also might be cloudy. Oh well. I'll be having a look anyway, since it's early our time.

A total eclipse of the moon tonight is expected to delight skywatchers across the United States and much of the world.

It will be the last total lunar eclipse until 2010.

The easy-to-watch event will play out in several stages as Earth's shadow blocks sunlight from shining on the moon. Weather permitting, the eclipse will be visible from all locations in the United States, according to NASA. Along the Oregon and northern California coasts, the moon will rise during the early stages of the eclipse, however.

Eclipses occur only at full moon when the sun, Earth and moon are in a perfect line. Because the moon's orbit around Earth is not perfectly aligned with the plane of Earth's orbit around the sun, eclipses do not occur at every full moon.

Some 78 minutes later, the moon will slip into full eclipse. About 51 minutes later, a bright scallop will appear as the moon starts emerging. It will be completely out of the umbral shadow at 9:09 p.m. Pacific time, which is 12:09 a.m. ET on Thursday morning. [...]

Have you ever wondered why the moon looks red during an eclipse? It's our sunsets and sunrises on earth being projected onto the lunar surface: 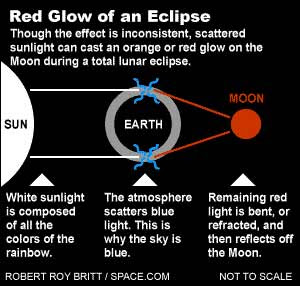 [...] The redness occurs because while the moon is in total shadow, some light from the sun passes through Earth's atmosphere and is bent toward the moon. The effect is to cast all the planet's sunrises and sunsets on the moon.

Christopher Columbus famously used a blood-red eclipse in 1504 to frighten natives on Jamaica into feeding his crew. [...]

Is that cool, or what? Check out the link to the www.livescience.com website for more information and diagrams about Lunar eclipses. This will be the last total lunar eclipse until 2010, so make the most of it if you can.