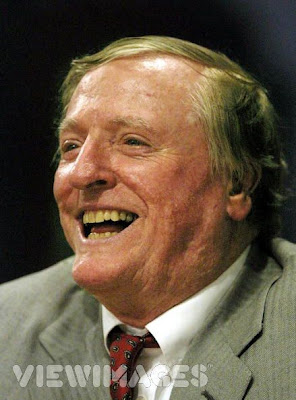 William Buckley follows his wife Pat less than a year after her passing.

Buckley's magazine National Review was the first political publication that I really appreciated. It offered intelligent and rational analysis, debate and opinion. It broadened my horizons and increased my understanding of so many issues. It was and is a refuge from the stupidity of political correctness and the irrationality of emotional "thinking".

The following in John McCain's tribute at NRO's The Corner

I am very profoundly saddened to hear of the passing of William F. Buckley Jr. and offer my deepest condolences to the Buckley family. Bill had many friends, including my parents, who he even took time to visit when they were stationed at the U.S. Pacific Command in Hawaii. My father and mother very much admired him and so did their son. With Bill’s passing, freedom has lost one of its greatest defenders. Bill was a great American who helped change the course of history. When conservatism was a lonely cause, he bravely raised the standard of liberty and led the charge to renew the principles and values that are the foundation of our great country. A man of tremendous vision and big ideas, he founded the National Review in 1955 and through its pages and his other endeavors, as a lecturer, commentator, debater and author of dozens of books, inspired many and advanced an intellectual rigor that transformed American politics. Bill was an American giant who shall be missed.

I think there are many of us who feel we owe this man great thanks for not only what he did, but what he left behind for us. Thank you Mr. Buckley, you'll be missed indeed.