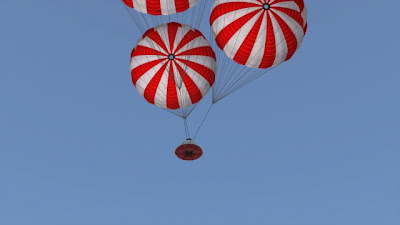 What is the best way for a spacecraft to safely return to earth? Here is a look at two very different spacecraft, and the decisions they face:

[...] NASA expects to decide sometime in 2008 whether the Orion Crew Exploration Vehicle, the agency's space shuttle replacement, will typically splash down off the California coast or touch down on dry land when it returns from space.

Time is of the essence because the choice will determine a number of other design decisions that need to be made between now and a scheduled review in September, NASA officials say.

It is a decision NASA officials have likened to choosing the shape of the space shuttle's wings or the International Space Station's orbit. As might be expected in cases where the long-term consequences of a decision are not always obvious, NASA is not of one mind on the Orion landing question. [...]

There are so many variables to consider. If they choose land landings, they can reuse the capsules 10 or 15 times. If they land in the water, the salt water ruins the capsule - depending how long it's in the water. 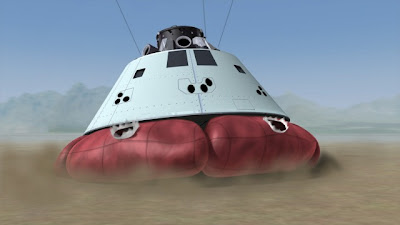 But if they land on land, they need airbags, and that adds a lot of extra weight, and they have to eject the heat shield before the airbags can deploy. The extra weight is controversial:

[...] "That's a pretty big amount in terms of the mass challenge that the Orion team was facing last summer," Hanley said. "That 1,500 pounds represents quite a bit of the amount that they were trying to burn down."

Land-landing advocates inside NASA argue that the added weight is worth it if it means the difference between using each Orion capsule up to 10 times instead of throwing it away after every mission. By treating Orion as expendable, they argue, NASA could find itself spending hundreds of millions of dollars annually keeping production lines open. That money, they say, would be better spent establishing a robust presence on the moon.

"It's the difference between going to the moon to stay and making one two-week trip a year," one such advocate said.

Gilbrech said the Constellation Program is being asked to assess the long-term cost implications of a water- versus a land-landing scheme. A key factor in the analysis is the cost of maintaining a permanent Orion production capability versus building enough vehicles and spares to last 30 years and then shutting down the assembly lines. [...]

And that's not all. There are so many variables to consider, and it has to be decided soon. Once they decide, they are stuck with it, so lets hope they make the best choice. The designs keep changing too: 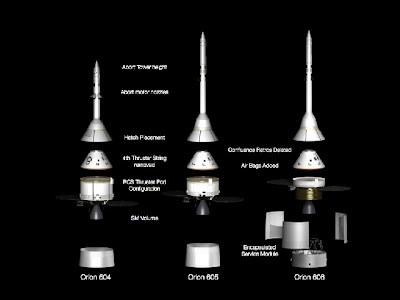 I like the idea of a reusable spacecraft, on the face of it you would think it would be cheaper than building new each time, but I suppose a detailed cost analysis will have to be done. What a thing to have to make a quick decision about!


Meanwhile, Virgin Galactic is working on it's own commercial space flight offering, Space Ship Two (SS2). It doesn't have the same re-entry issues, because it doesn't go into full and complete orbit. It's re-entry is more similar to an airplane or the space shuttle.

There is an aspect of SS2's re-entry that is a bit scary. It's the folding wings: 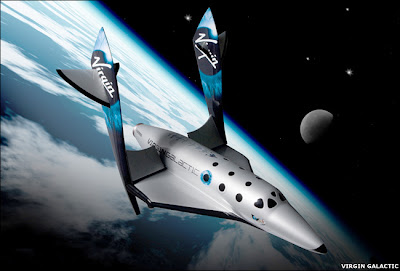 [...] When SpaceShipTwo reaches the top of its climb, it "feathers" its wings. This configuration gives the spaceliner stability as it begins to fall back through the upper atmosphere.

The rocket spaceliner will carry two pilot astronauts and six ticketed passengers. They will fly initially from a new facility called Spaceport America in the New Mexico desert.

The journeys will last about two-and-a-half hours from beginning to end.

Eight individuals will be aboard each flight

Passengers on SS2 will climb to an altitude of 110km, from where they will get to experience weightlessness for a few minutes, and see the curvature of the Earth and the black of space. [...]

That's fine, but when it's time to return, what happens if one of those folding wings gets stuck? Ok, they don't call them folding wings, they call them "pivoting" wings, but it's still moving parts. If something gets jammed, you can't fix it up there.

[...] The configuration is designed to reenter the atmosphere at any angle. “This vehicle is designed to go into the atmosphere in the worst case straight in or upside down and it’ll correct. This is designed to be at least as safe as the early airliners in the 1920s,” said Rutan. Later in the press conference, Rutan was asked to clarify that 1920s comment. He said: “Don’t believe anyone that tells you that the safety will be the same as a modern airliner, which has been around for 70 years.” Rutan also noted that SpaceShipTwo will have to be 100 times more safe than government space travel. [...]

Ida know, I might just wait for the Orion Space Clipper after all...

Or maybe I'll just stick to being an Armchair Astronaut.

NASA goes Back to the Future