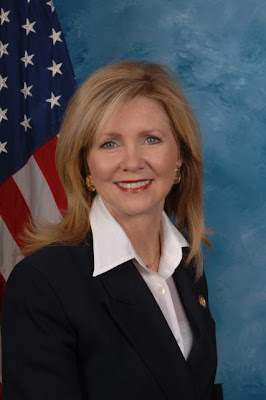 At least she ought to be seriously considered. Her name is being kicked around a lot, and she certainly would be a great choice in many ways:

Marsha Blackburn is an established, conservative, results-oriented legislator who solves problems. She was sent to the U.S. House of Representatives at the start of the 108th Congress where she was one of only a few newly-elected congressmen selected to serve as an assistant whip on the majority whip team and the first female in Tennessee elected in her own right to the US House.

Blackburn was elected State Senator in 1998, becoming the first woman to represent Tennessee's 23rd Senate District. While in the Tennessee Senate, Blackburn led a statewide grassroots campaign to defeat the proposed state income tax. Her frequent appearances on talk radio and positive mention in national publications like the Wall Street Journal made her a recognized national anti-tax and government reform advocate. She quickly earned a reputation for keeping her legislative focus on defending and expanding individual freedom and free enterprise.

Blackburn willingly accepts the responsibility of helping shape American fiscal policy as a member of the exclusive House Energy & Commerce Committee. For 208 years, the Committee on Energy and Commerce, the oldest legislative standing committee in the U.S. House of Representatives, has served as the principal guide for the House in matters relating to the promotion of commerce and to the public’s health and marketplace interests.

Representing both a portion of metropolitan Nashville and the suburbs of Memphis, Blackburn has strong ties with some of the nation’s premier songwriters and performers. In 2003, Blackburn founded the Congressional Songwriters Caucus to give the nation’s creative community access to Capitol Hill. The caucus focuses on the protection of intellectual property and tax policy.

A graduate of Mississippi State University and a small business owner, Blackburn has been actively involved in Tennessee grassroots politics and civic organizations for more than 25 years. Blackburn was born on June 6, 1952. Marsha and Chuck Blackburn have been married for thirty-two years. They have two children, Mary Morgan Ketchel, and Chad Blackburn.

Beauty, Brains, Experience and Competency. A winning combination! Marsha has also made some great comments about Hillery Clinton's complaints about being treated differently because she's a woman candidate.

You can look at some more potential Veeps here:

Marsha Blackburn: The TN Congresswoman is attractive, has a superb personality, and has a 97% lifetime ACU rating. She would be a fantastic choice if McCain wanted to reach out to conservative voters and women voters at the same time. Of course, Blackburn has only been in office since 2002, but that still makes her more experienced than Barack Obama. How seriously McCain would look at Blackburn is hard to say, but at first glance, she would appear to be an excellent choice for Veep.

Jim DeMint: DeMint is relatively young, feisty, is a decent speaker, and is extremely well liked by conservatives. He would be a good choice to shore up McCain's right side. However, DeMint has yet to finish his first term in the Senate, which may keep him from getting serious consideration as Veep (He has already spent 3 terms in the House though).

Tim Pawlenty: Pawlenty is the governor of Minnesota, which could be a key swing state in 2008. He's also relatively young, conservative, and endorsed McCain early on. You have to think that Pawlenty will be one of the candidates who gets a really hard look from McCain.

Have a look at the whole list. Who would you pick as the best Veep for McCain?

Nice article. It's good to see a full bio instead of the typical short list for VP.

I got Blackburn's bio from her congressional web site. Another good veep choice, Jim DeMint, has an even more detailed bio on his senatorial web site.

Jim DeMint probably would stand a better chance from McCain's best- of- all choices point of view...but I'd love to see a conservative woman VP in action in Washington as opposed to the liberals like Nancy Pil. Marsha Blackburn would be a good choice. Well, John....whataboutit??

Yes, Jim DeMint looks like a very good choice in many ways. I chose to showcase Marsha Blackburn because she is less well known, and as a reminder that the GOP also has qualified women who are also excellent choices to consider.