Do yourself a favor and believe every word he says. When I say this man is the most dangerous candidate for president we may have ever seen, I mean it. The disarmament agenda he spews in this video is classic George Soros theory aimed at knocking America into a second-world country, putting us at grave risk to tyrannical regimes around the world. It is craven self-loathing, aimed at ending the future of our country, capitalism and liberty. And imagine, Obama says these things with the world at war and as genocidal regimes continue to build their bombs despite 'promising' not to do so, or being 'banned' from doing so.

I believe him. The Democrats on the whole want to weaken America, and especially our military. They so no external dangers, they see US as the danger.

Since Jimmy Carter, the Democrats have weakened our military and our foreign policy. Bill Clinton not only failed to act against terrorists, he also believed America should "absorb" a nuclear first strike, before launching a retaliation strike. If we sustained a strike before launching a counter-strike, we would have nothing to retaliate with. By promising to not retaliate, we would actually be inviting a first strike. Duh. But you can't tell that to the Democrats, because they believe WE are the problem. 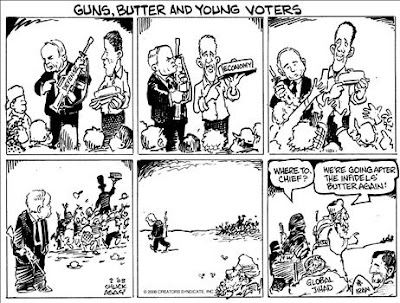 I must say, I prefer to support someone who is actually paying attention to events in the world:

Someone who believes in America and that it is actually worth protecting, not weakening.

"Where is the audacity of hope when it comes to backing the success of our troops all the way to victory in Iraq? What we heard last night was the timidity of despair. Our allies deserve better, our soldiers deserve better, and so do the American people."