Why we NEED to FIGHT, not turn and RUN

This is one of the sickest videos I have seen. From The Jawa Report, A Taliban video, in which a 12 year old boy beheads a man, while other children watch and cheer:

[...] It's so bad that there was some debate amongst ourselves whether to show it or not. Yesterday we put up a link to a video showing al Qaeda in Iraq burning hostages alive. Allahpundit, speaking of that same video says:

Not for those with weak stomachs; not really for those with strong stomachs, either. But force yourself, as none of Cordesman’s charts, as impressive as they are, will drive home to you like this will what it means in practical terms that far fewer of these subhumans are walking around Iraq today than last year. They deserve every misery inflicted upon them.

Indeed. No, the Taliban aren't the "Iraqi resistance" which some on the fringes of the left seem to love so much, but they're just as bad.

The boy slits the man's throat as he begins cutting, sawing through the neck with great difficulty, while the other children cheer him on; the neck bones are especially difficult, but he eventually severs the man's head completely, and holds it up proudly for the camera and cheering children. 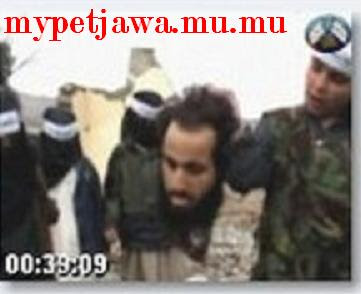 I'm pretty sure the man was dead already, as the blood didn't splurt out, and there was no blood coming from his nose or mouth, which would have happened if he were breathing. Some might argue that it's not so bad then. I would say, practicing on cadavers is preparation for a real live execution. Desensitizing children at an early age is essential, and a stepping stone for worse things still.

If you can't see the video, you can see sequential photos from it here (scroll down when you get to the page).

The savages who made this video want us to see it. They make these videos for two purposes; to encourage each other in their insanity, and to strike fear into the hearts of anyone who would resist. They want people to be afraid, and SUBMIT.

And it's not just the savages in the Taliban. Al Qaeda in Iraq are just as savage:


Hillery Clinton has said that she would withdraw our troops from Iraq within 60 days. Barack Obama also believes in setting a withdrawal date. The Democrats as a whole want to see us fail in this war, and will insure that it happens as quickly as possible.

Islamo-fascism is spreading like a cancer, and with every retreat it grows stronger. If we leave Iraq too soon there would be a bloodbath worse than anything we've seen thus far, and it wouldn't stop there.

I believe John McCain would fight with resolve, and fight to win. He advocated the surge years ago. Soldiers don't like protracted wars, because they don't like to see their fellow soldiers killed. They do what's needed to get the job done and WIN.

I'm fed up with conservatives complaining how they won't support McCain, because he's not conservative enough. Has nearly everyone gone insane?

The Democrats want to ignore Islamo-fascism in favor of "free" health care and more government, a Nanny state to change their diapers. Conservatives are saying they want to "sit this one out" while they worry about gay marriage and Mormon underwear, and wait for a Presidential candidate in some imagined future election that's more like themselves.

If such conservatives cannot see and appreciate the gravity of the dangers facing us, then they are no better than the Democrats, and I cannot support them anymore than I can support the Democrats. Why? Because supporting either of them will have the same ending; Clinton or Obama in the White House, with all their WEAKNESS, and all the horrors that will follow on that.

I don't enjoy watching these videos, or posting them. It makes me sick, but I forced myself to watch them. It's ugly and horrific, but it's not going to go away by ignoring it; ignoring it is exactly how it's gotten as bad as it has. Continuing to ignore it will insure it grows worse still. Let's put someone in the White House who is up to the task of dealing with it. Let's insure we have a future that is bright, and not a Sharia based-nightmare.

Let's insure we HAVE a future.


Hat tip to Pat, who told me about the links this morning. Here's a link to his post:

You know, these pictures illustrate the complete barbarity of our enemies, but there's no left wing outcry...

So many years later, when George W. Bush unveils his plans to bring democracy and freedom to Iraq and potentially the entire middle east, do the commies rejoice and get on board with it?

No, of course not, they just change their tune. NOW America is evil because it doesn't respect the traditions of the middle east (like crushing women and killing gays), and because it interferes in other countries cultures that don't NEED democracy, because they have religious Sharia law instead. Now America isn't just evil, it's racist, too.

The left has never been interested in democracy, women's right's, gay's rights, or anything else. They are only interested in POWER. And they will support anything in any circumstance that they can use as a weapon to attack the status quo, and thus help themselves to gain power.

So in America they support discontented feminists and gays, in the middle east they support Sharia law and Jihadists. They basically support anything that is against the American establishment, and that would weaken it.

The Rule is: America, no matter what it does or does not do, is always greedy, racist and wrong, and always to blame, at all times, in every circumstance... UNTIL it renounces capitalism, republicanism and the democratic rule of law. Then, it might be ok.

As my commie fiends used to say, "The ends justifies the means".