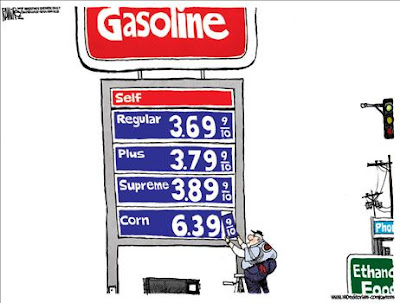 I warned about this in a previous post in May of last year. Now it's happening, and it's not only a waste of taxpayer's money, it's damaging our economy and causing food prices to rise world-wide. Walter Williams at Townhall.com gives us the details:

[...] Ethanol is 20 to 30 percent less efficient than gasoline, making it more expensive per highway mile. It takes 450 pounds of corn to produce the ethanol to fill one SUV tank. That's enough corn to feed one person for a year. Plus, it takes more than one gallon of fossil fuel -- oil and natural gas -- to produce one gallon of ethanol. After all, corn must be grown, fertilized, harvested and trucked to ethanol producers -- all of which are fuel-using activities.

Ethanol is so costly that it wouldn't make it in a free market. That's why Congress has enacted major ethanol subsidies, about $1.05 to $1.38 a gallon, which is no less than a tax on consumers. In fact, there's a double tax -- one in the form of ethanol subsidies and another in the form of handouts to corn farmers to the tune of $9.5 billion in 2005 alone.

Ethanol production has driven up the prices of corn-fed livestock, such as beef, chicken and dairy products, and products made from corn, such as cereals. As a result of higher demand for corn, other grain prices, such as soybean and wheat, have risen dramatically. The fact that the U.S. is the world's largest grain producer and exporter means that the ethanol-induced higher grain prices will have a worldwide impact on food prices.

It's easy to understand how the public, looking for cheaper gasoline, can be taken in by the call for increased ethanol usage. But politicians, corn farmers and ethanol producers know they are running a cruel hoax on the American consumer. They are in it for the money.

The ethanol hoax is a good example of a problem economists refer to as narrow, well-defined benefits versus widely dispersed costs. It pays the ethanol lobby to organize and collect money to grease the palms of politicians willing to do their bidding because there's a large benefit for them -- higher wages and profits. The millions of gasoline consumers, who fund the benefits through higher fuel and food prices, as well as taxes, are relatively uninformed and have little clout. [...]

I've only excerpted a few things wrong with ethanol from the article, there's more. Read the whole thing. I can't believe our government, both parties, is actually doing this to us. We can thank the global warming hoax and it's attendant hysteria too, for helping it along.

This post is a freaking service to America. Thanks, Chas.

Walter Williams did his homework. We all need to hear about it, but what will it take for the politicians in Washington to "get it" and pull the plug? It's a bad mistake, and needs to be stopped ASAP.