Why Witches and Broomsticks go together 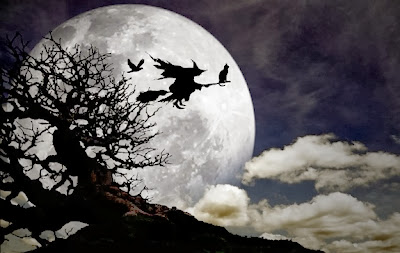 
[...] Many of the pointy-hatted sorcerers who roam the streets this Oct. 31 will be carrying broomsticks or besoms. But few likely know the murky tale of how witches came to be associated with those familiar household objects.

And guess what they do with those broomsticks?


The sun shot out a pair of gigantic solar flares early Friday -- the second one even bigger than the first, a NOAA expert tells the Los Angeles Times.

An X1-class solar flare occurred at about 1 a.m. PDT, followed by an even larger one about eight hours later.

"This one was an X2, twice as intense as the X1 that just occurred," said Bill Murtagh, program coordinator with the National Oceanic and Atmospheric Administration, in an interview Friday morning.

News of the latest activity came as NASA released a spectacular video and image, see above, of a solar eruption in September, what the space agency termed a "canyon of fire."

The video shows a 200,000-mile-long filament leaping from the atmosphere of the sun and creating a rippling, glowing canyon, which "traces the channel where magnetic fields held the filament aloft before the explosion," NASA says.

So what's with all the activity? Our home star is hitting solar maximum in its 11-year cycle activity, and scientists had predicted it would be meh -- a wimpier maximum than in cycles past.

The sunspot group that has been active Friday is rotating nearer the center of the sun, he noted. If the flares keep up, there could be more serious effects in store for Earth in the next three or four days.

Murtagh said that indeed this is the "lowest solar maximum since back in the 1900-1910 time frame." But that doesn't mean that X-class flares and their attendant problems will not occur. [...]

That's what my high school English teacher used to say. Here is a glimpse of what life along the Oregon coast used to be like in the distant past: 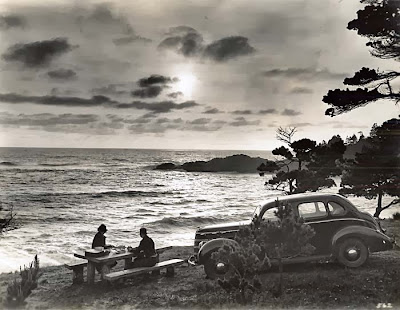 Setting the mood
The year is 1940, and you are driving with your family to Astoria to begin a trip down the Oregon Coast. Along the way, you listen to the car radio, laughing at the antics of Fibber McGee and Molly, tapping your fingers to the latest Big Band hit, and shaking your head at war news from Europe. You worry that America may need to get involved eventually.

As in the imaginary journey described above, text from Oregon: End of the Trail (1940 edition) is ready to point the way as you start your online tour of the Oregon Coast.

Our version of that text includes some revisions in punctuation and spelling, as well as changes designed to assure greater accuracy in historical references.

The accompanying photographs are from a collection of the Oregon Department of Transportation, Highway Division, now maintained by the Oregon State Archives. Individual photos in the collection are undated, but they were taken around 1940, and thus depict the Coast as it appeared to writers of Oregon: End of the Trail. When possible, the images have been placed close to associated text.

We hope you enjoy your trip down the Oregon Coast! [...]

This tour is great. The pictures, the descriptions of the various towns, and their population figures... it was practically empty back then, compared to now. What a different world it was back then. And no doubt, cheaper. ;-)

A country without an operating budget

1600 Pennsylvania Avenue and 1600 Days Without a Budget

The federal deficit increased by $146 billion in August, as reported by the CBO four days ago. Yet this conflicts with reports from the Treasury Department.

Yet as reported by CNSnews, “According to the Daily Treasury Statements that the Treasury publishes at 4:00 p.m. on each business day, the debt subject to the legal limit has remained at exactly $16,699,396,000,000–or about $25 million below the legal limit–every day since May 17.”

Why is this important? The current debt ceiling limit is $16,699,421,095,673.60. According to the debt clock, however, and if CBO reports for June, July, and August were added to the Treasury statements amount since May 17th, we would be way past the debt ceiling limit. In fact, August alone would have crossed the threshold. So what is our current debt?

Incidentally, the reason why Congress even has to consider the question of funding the government or shutting it down past September 30 (the last day of the fiscal year) is that there is no operating budget. The last time the Senate passed a budget was April 29, 2009. Nearly the entirety of Obama’s time as President has been this way. For the Senate to abrogate its basic fiduciary responsibilities in such a major way is unconscionable. [...]

Is "unconscionable" becoming the new "commonplace"? How can the Treasury just "stop" the debt clock at May 17? It makes their daily statements completely meaningless. Ditto the inflation index, which no longer includes the cost of food or fuel. And all this phoney talk about the "approaching" debt ceiling, when we have already passed it. What happened to reality? How many people are actually paying attention?

A household or a business without a budget gets into trouble quickly. Why should a country be any different?


Latest NetMarketshare figures suggest Windows 7 is outpacing Windows 8's adoption, despite a rapid reduction in Windows XP usage over the past quarter.

To put this into context, Apple's latest desktop operating system OS X 10.8 operating system grew by 0.27 percentage points to a mere 3.7 percent of the overall share. But this figure accounts for just shy of half of Windows 8's overall growth for August.

Meanwhile, Windows XP, which is set to lose Microsoft support for patches and updates in April 2014, lost a hearty chunk of share, dipping 2.25 percentage points to 31.4 percent of the overall market.

It comes at a time when Intel, as the dominant chipmaker in the PC market, may struggle in its second-half earnings, according to Sterne Agee analyst Vijay Rakesh. He warned in a note to analysts on Monday that "back to school PC demand has been virtually absent," which typically drums up mid-year sales of PCs and other devices ahead of the lucrative December holiday sales period. A drop in PC sales for the quarter will no doubt have a negative impact on the software platform market. [...]

Windows 8 is optimized for computers and tablets with touch-screens. Without a touch-screen, you have to rely on scroll-bars, which makes it slow and clunky to use. I believe this is one of the main reasons why people are sticking with windows 7; it works better for computers without touch screens. There are lots of other reasons too I'm sure, but I think that is the biggest one presently.

Some very good points are made in this article:

Five reasons why Windows 8 has failed

The article has a chart that shows how windows 8 is doing much worse than windows Vista did. Gosh, that's REALLY bad. But the five reasons given make perfect sense, to anyone who's been paying attention.