Apparently, Elon Musk lives in one of these as his primary residence in Texas, near his space base.
Mass produced on assembly lines, small footprint when it ships, easy to assemble.  Economical. Afordable. Interesting!
Posted by Chas at 1:36 AM No comments:

Why the vaccine is a good choice, even if you've already had Covid

If you've had Covid, do you need the vaccine?

[...] Those with powerful natural immunity may be protected from reinfection for up to a year. But even they should not skip the vaccine, experts said. For starters, boosting their immunity with a vaccine is likely to give them long-lasting protection against all the variants.

“If you’ve gotten the infection and then you’ve been vaccinated, you’ve got superpowers,” said Jennifer Gommerman, an immunologist at the University of Toronto.

Without that boost, antibodies from an infection will wane, leaving Covid-recovered people vulnerable to reinfection and mild illness with variants — and perhaps liable to spread the virus to others.

This is the same argument for giving boosters to people who are fully vaccinated, said Michel Nussenzweig, an immunologist at Rockefeller University in New York. “After a certain period of time, you’re either going to get boosted or you’re going to get infected,” he said.

How immunity from infection and from vaccination compare is difficult to parse. Dozens of studies have delved into the debate, and have drawn contradictory conclusions. [...]

There are a lot more details in the article, it's worth reading the whole thing.

Social and cultural effects on drinking alcohol, and behavior:

Drinking Games
How much people drink may matter less than how they drink it.


[...] Steele and his colleague Robert Josephs’s explanation is that we’ve misread the effects of alcohol on the brain. Its principal effect is to narrow our emotional and mental field of vision. It causes, they write, “a state of shortsightedness in which superficially understood, immediate aspects of experience have a disproportionate influence on behavior and emotion.”

Alcohol makes the thing in the foreground even more salient and the thing in the background disappear. That’s why drinking makes you think you are attractive when the world thinks otherwise: the alcohol removes the little constraining voice from the outside world that normally keeps our self-assessments in check.

Myopia theory changes how we understand drunkenness. Disinhibition suggests that the drinker is increasingly insensitive to his environment—that he is in the grip of an autonomous physiological process. Myopia theory, on the contrary, says that the drinker is, in some respects, increasingly sensitive to his environment: he is at the mercy of whatever is in front of him. [...]

The Simplest and Most Powerful 5 Minute Evening Routine

How to argue with someone who won't listen

Stop using logic. You are likely dealing with someone who may be experiencing congnative dissonance. At least, that's what this youtube video talks, about, with real-life examples:

How to argue with someone who won't listen
It's pretty interesting stuff. Why people stick with emotional arguments that make no sense. When rapport is broken. How to get it back. Of course, on TV programs, breaking rapport is often deliberate, and meant to provoke angry, emotional responses, to drive up ratings. Which is why I don't watch TV anymore, for the most part. Give me intelligent conversation and debate, or I can't be bothered with it. j Which means, most of what's on TV these days.

Our Current Political Reality: Where we are now. How we got here. And where it's taking us...

"Bobos" stands for "Bourgeois-Bohemians". People from Ivy-league schools, with capitalist incomes and hippy values, who are the current political class dominating our politics. From the Atlantic Monthly:

HOW THE BOBOS BROKE AMERICA
The creative class was supposed to foster progressive values and economic growth. Instead we got resentment, alienation, and endless political dysfunction.

[...] The class structure of Western society has gotten scrambled over the past few decades. It used to be straightforward: You had the rich, who joined country clubs and voted Republican; the working class, who toiled in the factories and voted Democratic; and, in between, the mass suburban middle class. We had a clear idea of what class conflict, when it came, would look like—members of the working classes would align with progressive intellectuals to take on the capitalist elite.

But somehow when the class conflict came, in 2015 and 2016, it didn’t look anything like that. Suddenly, conservative parties across the West—the former champions of the landed aristocracy—portrayed themselves as the warriors for the working class. And left-wing parties—once vehicles for proletarian revolt—were attacked as captives of the super-educated urban elite. These days, your education level and political values are as important in defining your class status as your income is. Because of this, the U.S. has polarized into two separate class hierarchies—one red and one blue. Classes struggle not only up and down, against the richer and poorer groups on their own ladder, but against their partisan opposite across the ideological divide. [...]

This explains a lot. It doesn't bode well for the country, as we turn on eachother, weakening us and giving our enemies outside, opportunities to exploit.

A fine Oregonian Artform.  First prize this year, was a giant crab: 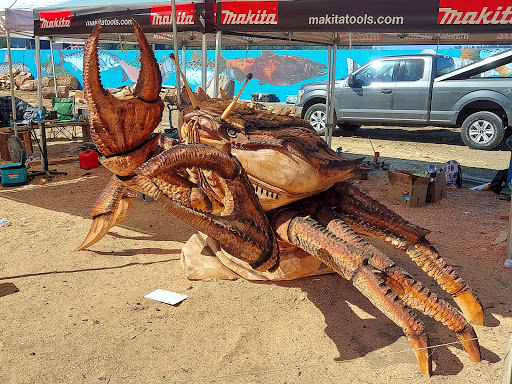 If our favorite Sci-Fi Spaceships were real...

If they were real, you might be able to go visit them at an Air-show.  This web site pretends that the ships were created for real for the TV shows they were in, and that you can go visit them in the real-world:

The SCI-FI AIR SHOW’s purpose is to preserve and promote the rich and varied history of Sci-Fi/Fantasy vehicles. Through display and education we seek to celebrate the classic design and beauty of these ships and the rich imaginations that created them. When the cameras stopped rolling, many of these proud old ships were lost and forgotten. Please join us in working to keep these rare and beautiful birds soaring!

Follow the link and visit some of your favorite spacecrafts from TV and Movies. The Jupiter II from Lost in Space, various space crafts from Star Wars, Start Trek, Space: 1999, 2001: A Space Odyssey, and other assorted shows and films: 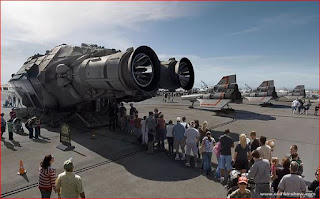 They have photos of the interiors too!  It's a real stroll down memory lane, for Sci-fi fans.

Georgia voting: Fact-checking claims about the new election law
Posted by Chas at 12:13 AM No comments:

Best Linux Distributions That are Most Suitable for Beginners

Brief: It’s easy to get overwhelmed by the list of Linux distributions available. In this article, we will mention the best Linux distros for beginners.

Let’s face it, Linux can pose an overwhelming complexity to new users. But then, it’s not Linux itself that brings this complexity. Rather, it’s the “newness” factor that causes this. Not getting nostalgic, but remembering my first time with Linux, I didn’t even know what to expect. I liked it. But it was an upstream swim for me initially.

Not knowing where to start can be a downer. Especially for someone who does not have the concept of something else running on their PC in place of Windows.

The first thing that confuses a newcomer is that Linux is not a single operating system. There are hundreds of Linux distributions. We have covered why there are so many Linux in detail, so I am not going to discuss it again.

Here are a few lists of Linux distributions based on different criteria:


They review 9 different distributions to choose from. See the full article for photos and screenshots, embedded links and more.

These are the typical elements, or structure, of story telling:

In 2012 Pixar Story Artist Emma Coats tweeted 22 storytelling tips using the hashtag #storybasics. The list circulated the internet for months gaining the popular title Pixar’s 22 Rules of Storytelling. We reposted this list two weeks ago and the response has been phenomenal with thousands of likes, shares, comments and emails.

Since posting the story, a number of people have contacted us regarding rule number 4 on the list, also known as ‘The Story Spine’:

Reports were that this tip did not originate with Pixar but instead with writer/director/teacher Brian McDonald. Intrigued, we contacted Brian to find out more. He replied as follows:

I should clear up that the story spine (Once upon a time…) is not mine. I think many people first learned it from me because of my books, classes and lectures I have given over the past dozen years or so. It did not originate with Pixar either. I looked for the origin of these steps when I was writing my book, but never found it and I say so in the book. It has been used in impov as an exercise where is where I first learned it. I know a guy looking for the origin, but he’s not having any luck either.**

Brian added that in the original story spine tweet a step was actually left out. The final step should be And ever since that day… As Brian says, the list ‘keeps getting copied with this missing step and it’s an important step.’

Brian, an award-winning filmmaker in his own right, has taught his story structure seminar at Pixar, Disney Feature Animation and Lucasfilm’s ILM. For readers wanting to know more about The Story Spine, the following article by Andy Goodman explores in further detail these 7 simple steps for building more engaging stories. [...]

Follow the link and read the whole thing, for a more detailed look with examples, and embedded links for further references.

I have always loved the song, it's so hauntingly beautiful. This video goes into a lot of detail that helps explain why.

It also explains why there are some versions of the song I don't like. It's more than just style. Some versions have key elements missing. The orginal early versions were more complex than most people realize.
Posted by Chas at 11:34 PM No comments: