Russia: Returning as a World Power?

Thinking the Unthinkable: Russia Has Re-Emerged As a Great Power


The Western image of Russia and Putin in recent years has been very negative. President Obama has publicly called Vladimir Putin a “schoolboy who slouches in his chair in the back of the room“ and derided his country as a mere “regional power.”

This begs the question: how Russia could again become a major power after the disintegration of the Soviet Union in 1991? How could Putin do this without an agrarian or consumer revolution and with the massive drop in the price of oil? If Putin is a terrible leader, then how can you explain successful interventions in Georgia (2008), Crimea (2014), Ukraine (2014-2016) and Syria (2015-2016)?

Putin, however, is actually a very shrewd leader with a brilliant Foreign Minister, Sergei Lavrov, who relies on a capable Foreign Ministry. Putin has rebuilt Russia’s military capability by spending $49B a year on security. Russia retains 1,790 strategic nuclear weapons. With over 140 million people and 13 million college graduates, Russia has nearly a million first-class scientists, engineers and technicians, most of whom work for the military.

Many former great powers are now no longer major powers. [...]

The article goes on to show the many ways that formerly great powers -including the United States- have declined in military and economic strength, leaving the door open for Russia to fill the void, as it is now doing. Read the whole thing, the article has many embedded links as well.

As I posted previously, while American policy in the Middle East is unfocused and confused, Russia seems to know what it wants, and how to go about getting it by leveraging what they have to work with and using it to maximum effect.

Are there relatively "Safe" places to live?

Here is a list of five, with reasons why:

5 countries with the lowest risk of disaster

Watching the events unfold in Japan and Libya has probably given a lot of people reason to consider their own safety, wherever they live. “What if that happened where I live?” is a perfectly natural question to ask when faced with wall-to-wall coverage of horrible devastation.

It’s true that no place is perfect, and there are always going to be some risks wherever you are in the world, whether it’s California, Indonesia, or London… but if you’ve been thinking about a move overseas, and the events in Japan and Libya have you wondering which countries run the lowest risk of destruction, read on.

* To be clear, what follows is not an exhaustive list, just a few countries that stand out as being particularly low risk for destructive natural disasters, nuclear meltdown, terrorism, or Qadaffi tactics. [...]


Follow the link to read about the five. Some of them may surprise you. The first one has been a favorite of mine for a while.

Do you speak Singlish?

They do in Singapore:

The official languages of Singapore


[...] Most Singaporeans speak a localized dialect of English called Singlish or Singaporean English, which can be difficult for foreigners to understand at first. Singlish is based on standard English with influences and loan words from Chinese, Malay and Indian languages. Singapore is a multilingual society, which is why Singlish developed over time. Singlish phrases are most common in the informal aspects of the English language, such as casual conversation. In school, every student learns English and a second language of their choice. Mandarin is the second most popular language, with over 70% of the population speaking it as a first or second language.

Wikipedia has more details on the Languages of Singapore.

States people are migrating to...

And of course, those they are leaving... 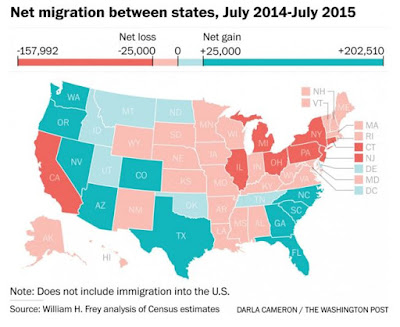 
When the U.S. economy slowed during the recession, so did one of the major demographic shifts of the last several decades. For a brief respite, the Northeast and Midwest stopped shedding quite so many residents to the burgeoning Sun Belt. That trend, though — which has big consequences for politics, among other things — has been picking back up.

New census data shows the trend accelerating back to its pre-recession pace. Florida, which actually lost more domestic movers than it gained right after the housing bubble burst, picked up about 200,000 net new movers between 2014 and 2015 (this number includes people who move between states, not immigration into the United States from abroad). Illinois, meanwhile, had a net loss of about 105,000 residents, its largest one-year population leak in the 21st century.

The District of Columbia, perched between the North and South, has been a winner, too.

The other big gains over the past year were Texas (170,000 new migrants), Colorado (54,00o), and Arizona and South Carolina (both with more than 45,000 each). Not a single state in the Northeast or Midwest gained domestic movers over the last year. [...]

I think much of it can be explained as people retiring and looking for a comfortable, affordable place to retire to. Younger people are likely going where the jobs are, and where there is affordable housing. Read the whole thing for more details, lots of embedded links, and more graphs showing stats for the regions of the US, and more.