The Push to upgrade to Windows 10

Talking on its Windows Blog, Microsoft has announced it will now stop support for installations of Windows 7 or Windows 8 if they are on new or upgraded computers running the latest chips from Intel INTC -10.34%, AMD or Qualcomm QCOM -4.44%. Specifically these are listed as ‘Kaby Lake’ (Intel), ‘Bristol Ridge’ (AMD) and Qualcomm’s ‘8996’ (the base for the Snapdragon 820). Between them these chips will dominate sales of all new desktops, laptops, hybrids and tablets in 2016.

In fact Microsoft is going even further than this by also refusing to support Windows 7 and Windows 8 on Intel’s current generation ‘Skylake’ processors, with the exception of a “list of specific new Skylake devices”. This list includes the Dell Latitude 12 and XPS 13; HP EliteBook Folio and G3 and Lenovo ThinkPad T460s and X1 Carbon. Even then support on those devices will only last 18 months ending on 17 July, 2017.

Yes, you read this right: Microsoft is breaking from 31 years of Windows history by refusing to honour its promised Windows lifecycles unless users stick to old hardware. Upgrade your existing Windows 7 or Windows 8 computer to these chipsets or buy new hardware and install Windows 7 or Windows 8 on it and the official Windows Lifecycle dates don’t mean a thing.

All of which begs the question…

Read the whole thing for embedded links, and the links at the end to related articles. I've posted previously about Microsoft plans to
force the Windows 10 upgrade. This also is pressure in that direction.

I've been using Windows 10 on one of my machines. It's not absolutely horrible, and even has some nice features. It is thus far proving to be about 95% stable. Unfortunately, the unstable 5% can kick in when I'm trying to get serious work done. I find such unreliability intolerable to try and run a business with.

I need a RELIABLE computer platform to run business software like QuickBooks. If Windows 10 does not improve it's stability, I will most likely migrate to Apple, because it's a mainstream OS that can provide that stability. At least I hope it is. Can anyone tell me differently? No OS is without some problems, but a certain degree of stability is necessary for business. I use a computer to get work done, not so I can work on the computer to try to get it to work.
Posted by Chas at 2:18 PM 1 comment: 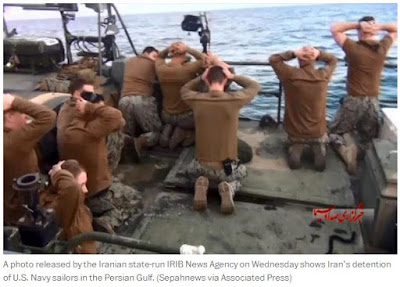 This humiliating Iran photo says it all


The Obama administration, the mainstream media and Democrats more generally vastly underestimate the potency of the photos and videos showing our Navy sailors on their knees with hands behind their heads as they are taken into custody by the Iranians. It is the perfect embodiment of what many Americans see as the humiliation suffered by the United States under this president as our adversities defy us and take advantage at every turn. To then have the utterly tone-deaf Secretary of State John Kerry insist that we did not apologize, but then publicly thank Iran, is even worse. And to top it off, we have film of our sailors held captive, compelled to apologize. The sole female sailor apparently was compelled to don a head covering.

This, according to President Obama and Hillary Clinton, is what a successful Iran policy looks like. No wonder Donald Trump, who speaks to the rage Americans feel about our declining respect in the world, is striking a chord.

The White House won’t dream of making a fuss, not when it so desperately wants to lift sanctions on Iran and push forward on the Iran nuclear deal, the very deal that has emboldened Iran to engage in stunts like this one. Oh, the administration is going to be “looking into the videos and would respond if the U.S. determined that the sailors were treated inappropriately.” Don’t hold your breath.

This is a propaganda bonanza for Tehran, one that it will exploit to the hilt to make clear to its allies and those it seeks to intimidate that the United States is weak, unreliable and useless. It furthers their ambitions in the region and demoralizes those resisting Iranian aggression. For countries and individuals on the fence (e.g. the Sunni tribes), the message is clear: You really want to stick your neck out for the Americans?

Bizarrely, Kerry thinks this shows how terrific our new relationship with Iran is because, you know, we got our people back. By continuing to act in effect as a PR flack for Tehran, Kerry invites further aggression and endangers our own troops and those of our allies. Be prepared to see Iran’s conduct become infinitely more audacious once it has pocketed more than $100 billion in sanctions relief. [...]

Read the whole thing for links and more. And get used to it. It's the Democrats Foreign Policy, and it's not going to change anytime soon.

When a mother's love is not enough...

Already notorious for its public and gruesome executions, a member of the Islamic State killed his own mother in front of a crowd in Syria this week after she tried to get him to leave the terrorist organization, according to reports.

The man, identified as Ali Saqr, 21, executed her in front of hundreds of people in the northern Syrian city of Raqqa, according to the Syrian Observatory for Human Rights and another Syrian rights group cited by The New York Times.

The groups said that she confronted her son and urged him to flee with her out of fear that coalition forces would soon sweep in and wipe out ISIS, the observatory said. Saqr turned her in to ISIS authorities, who then ordered Saqr to execute her in front of the post office where she worked, according to the observatory.

The execution is the latest example of the Islamic State's high-profile executions, which have included beheadings of American citizens, foreign journalists and others captured by the group. [...]

Talk about being disappointed in the way your kid turns out. This has to be among the worst examples. The poor woman. 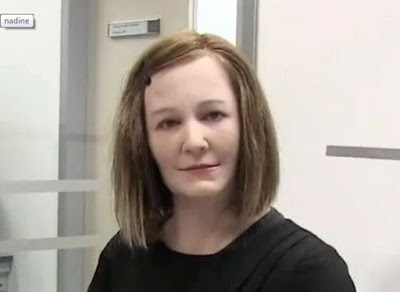 Does this “humanlike” robot receptionist make you feel welcome or creeped out?

From a distance, Nadine looks like a very normal middle-aged woman, with a sensible haircut and dress style, and who’s probably all caught up on Downton Abbey. But then you hear Nadine talk and move, and you notice something’s a bit off. Nadine is actually the construct of Nadia Thalmann, the director of the Institute for Media Innovation at Nanyang Technological University in Singapore. She’s a robot that’s meant to serve as a receptionist for the university.
Thalmann modeled the robot after herself, and said that, in the future, robots like Nadine will be commonplace, acting like physical manifestations of digital assistants like Apple’s Siri or Microsoft’s Cortana. “This is somewhat like a real companion that is always with you and conscious of what is happening,” Thalmann said in a release.

Nadine can hold a conversation with real humans, and will remember someone’s face the next time she sees him. She can even remember what she spoke about with the person the last time they met. NTU said in its release that Nadine’s mood will depend on the conversations she’s having with others, much like a human’s mood can change. There’s no word on what she’d do in a bad mood, though—hopefully she won’t be able to close pod bay doors, or commit murder. Perhaps when the robot uprising happens, we won’t even see it coming, as they’ll all look just like us. [...]

The article goes on to talk about how the evolution of these robots is likely to continue, as they get better and even become commonplace. Read the whole thing for photos, video, and many embedded links. Do watch the video, it's short. I have to admit it's the most life-like robot I've ever seen.

I said it was "kinda" creepy because it looks so life-like, yet is not alive, and I'm not used to that. Talking to "life-like" things. But I suppose if it becomes commonplace, one would get used to it as normal. But more than "kinda creepy", it's ... pretty darn kewl! Commander Data, here we come...

Here is another link to a similar robot by another scientist:


[...] Rothblatt also explained how she hired a team of robotic scientists to create a robot that was a “mind clone” of her wife, Bina Aspen.

Starting with a “mindfile”—a digital database of a person’s mannerisms, personality, recollections, feelings, beliefs, attitudes, and values gleaned from social media, email, videos, and other sources—Rothblatt’s team created a robot that can converse, write Tweets, and even express human emotions such as jealousy and pain in ways that mimic the person she was modeled after.

When Bina’s mortal self dies, Rothblatt said the robot version of her wife will live on, making it possible for “our identity to begin to transcend our bodies.”

It sounds like science fiction until you see photos of the robot, see her tweet, and hear snippets from her conversations that made audience members gasp and chuckle nervously as they realized Rothblatt was talking about more than just an idea. [...]

Read the whole thing for embedded links and more. And get ready for the Brave New World. It's closer than you think.

Actually, most of the 50 states didn't do very well in a recent investigation:

Oregon gets an F on holding officials accountable

A report released Monday by the Center for Public Integrity ranks Oregon 44 out of 50 states in terms of ethics and public records laws. It says state officials and lawmakers have failed to address profound weaknesses revealed by the allegations that forced Kitzhaber from office in February.

"For many, Kitzhaber's resignation is a thing of the past," the report says. "But the scandal that ensnared the former governor highlights a wobbly legal framework in Oregon's government, where good behavior is taken for granted rather than enforced."

The report, written by Lee van der Voo, a freelancer for The New York Times who covered Kitzhaber's resignation, blasts the Oregon Government Ethics Commission for being slow to respond to media reports that Kitzhaber and Hayes might have used their public roles to profit Hayes' private environmental consulting business. The couple remain under federal investigation. No criminal charges have been filed.

Oregon is among 14 states that received an "F" overall. The three highest-ranked states — California, Alaska and Connecticut — scored in the C-range. Thirty-three states got Ds. [...]

Read the whole thing, for embedded links and more. Reasons sited were budget cuts, which meant there were no funds for auditing or monitoring actions of politicians. How convenient.

The last integrity investigation was in 2012, when Oregon received a C- rating. So things have been getting worse. The following link gives a list of categories, and the individual grade to each, which leads up to the composite grade of "F", detailing Oregon's corruption problems:

I'm not surprised by any of it. But what is to be done about it? Nothing, I suspect.
Posted by Chas at 11:34 AM No comments: