It's Here at last: the Eee PC Laptop 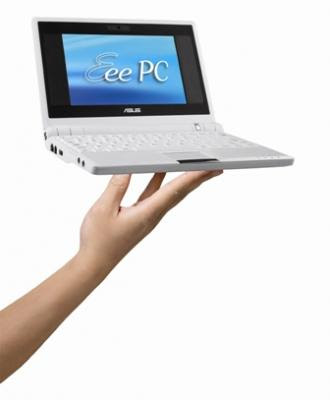 The Xandros Linux-powered "ultra-mobile PC" (UMPC) has finally arrived. One of the most eagerly awaited laptops in some time, the tiny Asus Eee PC 4G, is now available from online retailers that include Newegg and Directon.

When the news first broke that Taiwanese computer manufacturer Asus was coming out with a less than two pounds mini-laptop for under $200 that would be running Linux, both gadget and Linux desktop fans were thrilled. Now that it's here, the Eee PC 4G's price has doubled, but early reviewers are still finding this Xandros-Linux powered laptop to be worth the price. [...]

Is it worth the price? I would say that depends... 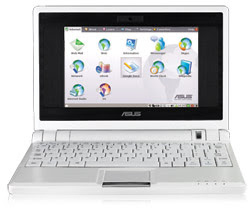 Earlier reports pegged the Eee PC's price at $190, and then at $250. However, the first shipping model in the 3EPC line barely squeezes in under $400.

Still, reviewer Mark Spoonauer says the laptop compares well to other UMPCs, some of which cost even more.

All things considered, I'm not as enthused about this product as I was when I first heard about it. It announced initially that the price would be around $200. Now the price is double that. Sure, they've added more flash memory, and that's driven the price up. But for a bit more than $400, you can buy a REAL laptop with a hard drive, full size screen and keyboard, and other standard features.

I find the Eee interesting technically, and I will be watching the reviews to see how it does. But I doubt I will be buying one anytime soon.

With any luck, the time may not be far off when I'll be able to buy an HP laptop with Ubuntu pre-installed. Here's to hoping!