My Police Scanner Choice; and the Winner is: 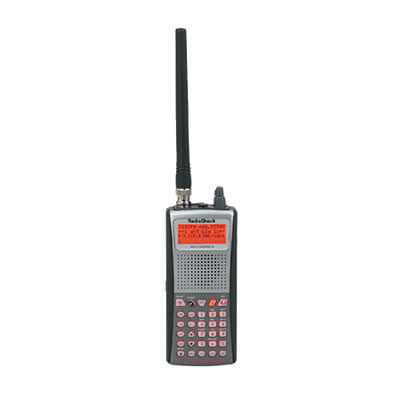 High-powered handheld.
High-performance, extended-coverage scanner has the ability to scan both trunked and conventional channels at the same time. Program up to 100 frequencies in banks of 10 for easier access. Triple-trunking lets you follow a signal in virtually any market that uses an analog trunking system. Signal Stalker™ circuitry searches for nearby frequency transmissions and lets you hear a nearby radio without knowing its frequency. Skywarn lets you hear local severe-weather observers and get warnings before they are broadcast on local radio or TV. The SAME feature provides weather and other emergency alerts for the areas you program into your unit. For a list of codes, click here.

* Alpha-numeric display for ID tagging allows frequencies to be identified by the name you assign
* Lighted keypad and backlit LCD display for use in low light
* Digital weather alert keeps you informed of emergencies; 7 NOAA weather stations preprogrammed
* Easy programming: download frequencies from computer to scanner (software and cable optional)


What's in the box

I could have got a decent cheaper model, if I had only wanted to scan police, fire and EMS frequencies. But I went with this more expensive model because it also scans a lot of HAM radio frequencies too, as well as Marine, Aviation and CB channels. It's also capable of handling trunked radio systems. I don't think any of the agencies in my area are using trunking presently, but if they ever move to it, I'll still be able to scan them.

I picked this particular model because it's been out for a few years now, and it has 300 customer reviews, most of which give it high marks. It has the most reviews of any scanner on the Radio Shack website.

There was an upgraded model, the PRO-164 1000-Channel Handheld Scanner, which looks exactly like the Pro-97. It's normally $219.99, but was also on sale for $169. It has extra features, such as a bar graph signal-strength meter, tone ID of priority tagged frequencies, and the ability to scan the 700 MHz range, which will become available next year when commercial TV goes digital. I could kinda kick myself that I didn't get the Pro-164, but I chose to stick with the Pro-97, because it has a proven track record. The Pro-164 only has 23 reviews, and some of those say the sound quality is not as good as the Pro-97, and I just didn't want to be a guinea pig for a new product.

So back to the Pro-97. It's portable, I can use rechargable batteries and recharge them without removing them from the scanner. Programing the scanner isn't what I would call easy, it reminds me of what programing VCR's used to be like when they first came out; semi-rocket science.

Many of the user reviews had said it's worth buying the cable and software to program it with, so I did. I'm using the Win97 program from Starsoft, which works fine with Windows XP on my PC. It's enabled me to download the frequencies for our local police, county sheriff, State police, EMS, and Fire departments. There are other codes for other things, such as Forrest service, Transportation department, etc. but the above is all I've done so far. The results have been very satisfying.

I am going to have really sit down with the manual though, and read it thoroughly to comprehend all the features, and to block things I'm not interested in, make backups of the frequencies I want to keep, etc. Some people complain that the manual is difficult to follow. If you find it so, there is help. There is a re-written version of the manual that's been posted on-line, that many have found useful:

The salesman at Radio Shack recommended that I buy an external antenna, since I live a considerable distance outside of town. He said a good antenna can make all the difference, so I went with his recommendation: At home, when I use the scanner with just the antenna it came with, it does pick up radio traffic from town. But when I use the external antenna, it seems to pick up a lot more traffic, including areas farther away, so I think it's worth every penny. I bought a 50ft cable to go with it. If you buy it, be sure and get the BNC connector to attach the scanner to the cable. I forgot mine, and had to go back days later to get it.

I won't be able to do an in-depth review until I work with the scanner more extensively and learn to utilize all of it's features, but thus far I am impressed with it's performance, and happy with my purchase.

If you are thinking of buying a scanner and you are only interested in scanning Police/Fire/EMT services, you would probably be happy with a cheaper scanner. But you need to find out if any of your local services are using trunked systems. If not, you can get a good scanner for as low as $79. Talk to the folks at your local Radio Shack, they probably know what's being used in your area. My store also gave me a sheet with the local frequencies to program the scanner with, but you can also find that information on-line by googling it.

Police Scanners part II; back to the $100 models

Radio Communications in a Changing World