Solar activity and it's disruption of GPS functions

Sunspot activity is becoming stronger than it's been in many years. During the past several years, GPS technology has been dramatically increasing in use. It will now be facing interference on a scale not seen before. Are we ready for it? 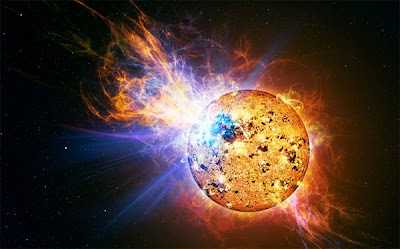 The sun's activity isn't usually a hot topic around these parts, but when it threatens to derail satellite navigation services around the world, it must surely take center stage. UK researchers have corroborated Cornell's 2006 warning that our solar system's main life-giver is about to wake up and head toward a new solar maximum -- a period of elevated surface activity and radiation. It is precisely that radiation, which can be perceived in the form of solar flares, that worries people with respect to GPS signaling, as its effects on the Earth's ionosphere are likely to cause delays in data transmission from satellites to receivers and thereby result in triangulation errors. Still, it's more likely to be "troublesome than dangerous," but inaccuracies of around 10 meters and signal blackouts that could last for hours are being forecast in the absence of any intervening steps being taken. So yes, you now have another reason not to trust your GPS too much.


GPS set for problems from the Sun

Researchers say the Sun is awakening after a period of low activity, which does not bode well for a world ever more dependent on satellite navigation.

The Sun's irregular activity can wreak havoc with the weak sat-nav signals we use.

The last time the Sun reached a peak in activity, satellite navigation was barely a consumer product.

But the Sun is on its way to another solar maximum, which could generate large and unpredictable sat-nav errors.

The satellite navigation concept is embodied currently by the US GPS system and Russia's Glonass network, with contenders to come in the form of Europe's Galileo constellation and China's Compass system.

It depends on what is - at its root - a simple triangulation calculation.

A fleet of satellites circling the Earth are constantly beaming a radio signal with two bits of exceptionally precise information: where exactly they are, and at exactly what time.

A sat-nav receiver on Earth - or on a ship or plane - is equipped with a fairly precise clock and the means to collect signals from the satellites that happen to be in its line of sight.

It then works out, based on how long it took those signals to arrive, how far it is from each of those satellites. Some simple geometry yields its position.

• 1. Satellites advertise their exact position, and the precise time at which they are sending it

• 2. The signal travels through the outer atmosphere, the ionosphere; its speed depends on how much the Sun's radiation and particle winds are affecting the ionosphere's composition

• 3. A receiver on Earth determines how long the signals took to arrive from a number of satellites, calculating the position from the time differences


But those signals are incredibly weak and, as researchers have only recently begun to learn, sensitive to the activity on the Sun.

Solar flares - vast exhalations of magnetic energy from the Sun's surface - spray out radiation across the electromagnetic spectrum, from low-energy radio waves through to high-energy gamma-rays, along with bursts of high-energy particles toward the Earth.

The radiation or waves that come from the Sun can make sat-nav receivers unable to pick out the weak signal from satellites from the solar flare's aftermath.

There is little that current technology can do to mitigate this problem, with the exception of complex directional antennas used in military applications.

Sat-nav receivers will be blinded for tens of minutes, probably a few times a year at the solar maximum.

A further complication comes from the nature of the outermost layer of the Earth's atmosphere, the ionosphere.

That is composed in part of particles that have ionised, or been ripped apart by radiation from the Sun, with the composition dependent on how much radiation is coming from the Sun at a given time. [...]

Read the whole thing for further explanation and details.


Another detailed article from the BBC is here:

It explains the problem well, and even offers some suggestions for how it might be coped with in some instances.

What a great time to shut down LORAN.
.

Yes, LORAN should have been kept as a back-up to GPS, until ways can be found to protect GPS from, or compensate for, solar interference.

As we face the largest solar Maximum in a decade in 2011 or 2012, some people are predicting conditions for a "perfect storm"; Never in human history have we had such a large and fragile global electrical and communications grid. Satellites are particularly vulnerable.

I intend to do a post soon to show how our use of, and reliance on satellites has exponentially grown, and what that can mean for us in a solar weather context.

I have noticed my older ( 04 ) GPS was lagging which I thought was just due to more and more folks using GPS devices in the So Cal area. What I would like to ask is ' do you think some people are sensitive to M class and higher, in that I feel extremely agitated when the sun go off?'

I'm not quite sure what you mean.

Look into solar activity and human behavior. Google it. By the way the next solar max will not be as big as predicted 3 or yrs ago. It will be moderate, thank God.

Yes, a quick look with Google does reveal some interesting things. I don't know enough about it to venture much of an opinion. It is perhaps grist for a future blog post. Thanks for sharing that.

I hope you are right about the next solar max being moderate, but it remains to be seen how accurate these predictions are.

I know that our knowledge about the sun IS expanding very quickly, and I don't doubt that our predicting capabilities may improve accordingly. Yet even if the next solar max is moderate, eventually we will have one that isn't. I can only hope that by then we have figured out how to prepare for it, and made the necessary preparations.