Ham Radio Contacts with Astronauts on board the International Space Station

I had heard that commander Wheelock was making lots of contacts from the International Space Station. I had looked up the times when the ISS was passing overhead, to see if I could hear anything, but unfortunately I was often busy with other stuff and kept missing my opportunities. But many others were quite successful: 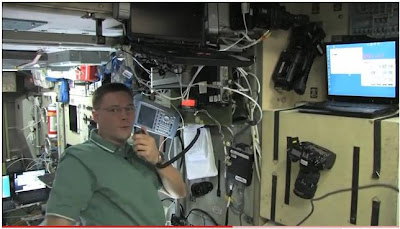 After more than 160 days in space, ISS Expedition 25 Commander Doug Wheelock, KF5BOC -- along with Flight Engineers Shannon Walker, KD5DXB, and Fyodor Yurchikhin, RN3FI -- has returned to Earth from the International Space Station (ISS), landing in Kazakhstan on Friday, November 26. While on board the ISS, both Wheelock and Walker participated in the Amateur Radio on the International Space Station (ARISS) program, and made 22 ISS-to-school and ISS-to-camp QSOs. In addition, Wheelock averaged about two dozen casual QSOs each week while on board the ISS.

During his last few weeks in space, Wheelock sent down a note to Johnson Space Center, asking to increase the number of ARISS contacts from one per week to two a week during his last month on the ISS. According to ARRL ARISS Program Manager Rosalie White, K1STO, Wheelock said he enjoyed the contacts with children, calling them “priceless.” White said that the ARISS Team quickly reviewed the list of schools on the ARISS waiting list and set up contacts for Wheelock.

In a 20 minute video taken aboard the ISS, Wheelock gave a tour of the ISS, even making a few ham radio contacts while passing over North America (the ham radio portion of the video begins at the 10:38 mark). [...]

It goes on about the many contacts Doug made, and says that the crew coming to the station on December 17th, will include two more Amateur radio operators. Good! Perhaps there will be more opportunities for me to try again.