The New Aquarium kits on the market seem to come with HOB (Hang On the Back) filters as a standard item. The one that came with mine uses special replacement pads, which are supposed to be replaced every 4 to six weeks or so. They cost about two bucks a piece, and while not prohibitively expensive, over time that can add up.

I seem to recall many years ago, that HOB filters were not unlike the box-in-tank filters, insofar as, you could load them up with whatever filter medium material you wanted, at much lower cost. So I looked on Amazon.com to see if such HOB filters still existed. They do: 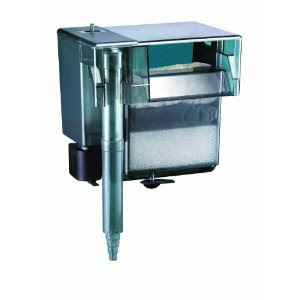 AquaClear 20 Power Filter
This model also has a flow control, which allows YOU to choose how strong the water flow is. The customer comments are mostly favorable, and it comes in
various sizes.

But what about the old in-tank box filters? I haven't seen any in stores, but they are still around: 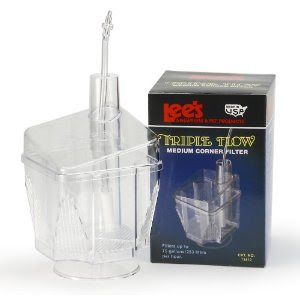 Lee's Triple-Flow Corner Filter, Small
Low-tech, but tried and true, and inexpensive to use and maintain.
They also come in small, medium and large sizes.

Why do I say tried and true? Consider this interesting comment posted by a customer:

There's a local fish shop in Lewiston, Maine I visit about every 2-3 weeks or so. The owner is a gentleman I'd guess to be about 70 years old who says he's been in the business for 40 years. I'd estimate he's got well over 100 tanks running in his store. Compared to the other pet stores in the area (Petco & Petsmart types), his tanks are crystal clear. Yesterday, I stopped by and struck up a conversation with him. He started asking questions about my tank (75 gallon freshwater) and my filtration system. When I told him I was running an Emperor 400 HOB filter, he promptly told me it was no good. I asked if I should go with a canister filter. He told me those are "crap".

He recommended that I install a couple large Lee's corner filters. He pointed out that he uses them in all his tanks, and credits the filters with keeping the tanks so clear. He claimed that he's sold 15,000 of them during his career. He emphasized how inexpensive they are to buy and operate, and that they require very little maintenance. He suggested changing out the carbon and polyester fiber about every 6 months...but also stated that he's got filters he hasn't touched in 3 years. For about $30, he set me up with 2 large filters, and enough carbon and polyester fiber to last at least a few years.

On the way home, I got to thinking about my little aging air pump, so I stopped at Walmart and picked up a more powerful Tetra Whisper Air Pump with dual air outlets for about $20. Less than an hour after I got home, both filters were up and running. Like some of the other reviewers stated, the quality of the plastic is disappointing...I'm giving this item a 4 star rating (rather than 5 stars) because of this fact. The unit seems quite fragile and I imagine it wouldn't take much to break it. However, I'm already liking these filters. I like the fact that they are clear, enabling you to see them at work. When I got up the next morning (about 12 hours after installation) I could see a noticeable difference in the water clarity.

For me, the true test will be how they perform over time. But for now, I'm impressed.

The old fashioned box filters are not only cheaper, but have the advantage of being able to run off of a battery operated air pump, should your power go off for any extended length of time.

I like the HOB filter because the pump is quieter than an air hose pump, and because it's external to the tank, leaving more space inside the tank. But all things considered, I'm not sure it's necessarily better. And I think getting some sort of emergency power to run an HOB would be much more challenging. A rather big DIY project.