A New and Better Titanic for the 21st Century? 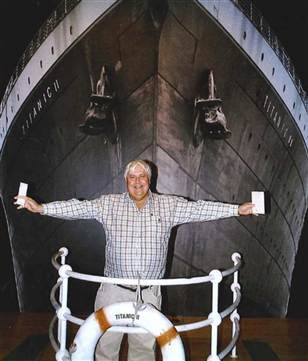 CANBERRA, Australia — An Australian billionaire said Monday he'll build a high-tech replica of the Titanic at a Chinese shipyard and its maiden voyage in late 2016 will be from England to New York, just like its namesake planned.

Weeks after the 100th anniversary of the sinking of the original Titanic, Clive Palmer announced Monday he has signed a memorandum of understanding with state-owned Chinese company CSC Jinling Shipyard to build the Titanic II.

"It will be every bit as luxurious as the original Titanic, but ... will have state-of-the-art 21st-century technology and the latest navigation and safety systems," Palmer said in a statement. He called the project "a tribute to the spirit of the men and women who worked on the original Titanic."

Palmer did not provide a cost estimate. He said he had established a new shipping company, Blue Star Line Pty. Ltd., and that design work for the Titanic II has begun with assistance from a historical research team.

The diesel-powered ship will have four smoke stacks like the coal-powered original, but they will be purely decorative.

The most obvious changes from the original Titanic would be below the water line, including welding rather than rivets, a bulbous bow for greater fuel efficiency and enlarged rudder and bow thrusters for increased maneuverability, Palmer said.

Brett Jardine, general manager for Australia and New Zealand in the industry group International Cruise Council, said Titanic II would be small by modern standards but could prove viable at the top end of the luxury market.

"From a marketing point of view, many will embrace it and perhaps there'll be some that wouldn't," Jardine said.

"If you've got a niche, it's going to work. Why go out there and try to compete with the mass market products that are out there now?" he added.

While the Titanic II would carry around 1,680 passengers, most modern cruise ships create economies of scale by catering for more than 2,000 passengers, he said.

.
An interesting idea. Kinda creepy. But it may have a niche market, and an appeal to history buffs.

If it has the same decor as the original Titanic, will it have the same 1st, 2nd and 3rd class rooms? I ask, because in one of the Titanic Museums, you can see what those cabins looked like.

Not bad. Kinda small, but elegant. 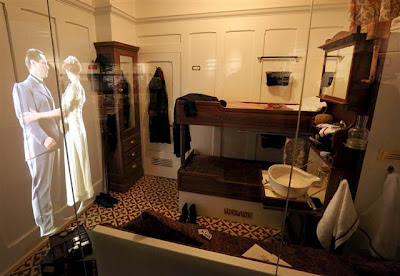 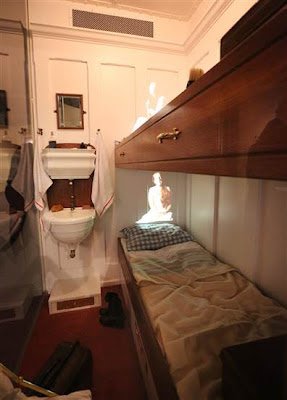 Dang! It's a walk-in closet/death-trap! Would
a Fire Marshall even allow it on a modern ship?

And of course, the original Titanic even offered cheaper accommodations in Steerage class. No rooms, just a storage hold, with hammocks hanging in it, I think. Hippies might like that, but insurance underwriters wouldn't.

Anyway, if the Titanic II does actually get built, it will be interesting to see what they do with it to accommodate it to the 21st century.

I got the pics from a slideshow, you can see the whole slideshow here.

UPDATE:
Oops! I was wrong about Steerage. Third Class on Titanic WAS the "new and improved" version of "Steerage". All the cabins were above the water line. They had self-flushing toilets for every corridor, access to a lounge, an open air deck, and a dinning room where they were served three hot meals a day.

A step up by the standards of the day. But a new Titanic would not have classes partitioned, at least I wouldn't think so. I doubt they would have the tiny 3rd class rooms either, but we'll see, if they every build it.

Here is a comparison of the size of the original Titanic, with the modern cruise ship, "Oasis of the Seas":