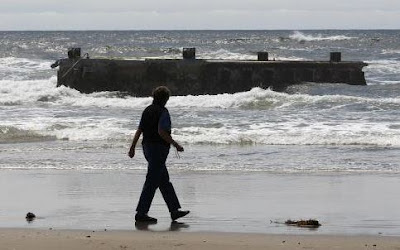 When the tsunami hit the northern coast of Japan last year, the waves ripped four dock floats the size of freight train boxcars from their pilings in the fishing port of Misawa and turned them over to the whims of wind and currents.

One floated up on a nearby island. Two have not been seen again. But one made an incredible journey across 5,000 miles of ocean that ended this week on a popular Oregon beach.

Along for the ride were hundreds of millions of individual organisms, including a tiny species of crab, a species of algae, and a little starfish all native to Japan that have scientists concerned if they get a chance to spread out on the West Coast.

"This is a very clear threat," said John Chapman, a research scientist at Oregon State University's Hatfield Marine Science Center in Newport, Oregon, where the dock washed up early Tuesday. "… It's incredibly difficult to predict what will happen next."

A dozen volunteers scraped the dock clean of marine organisms and sterilized it with torches Thursday to prevent the spread of invasive species, said Chris Havel, spokesman for the state Department of Parks and Recreation, which is overseeing the dock's fate.

The volunteers removed a ton and a half of material from the dock, and buried it above the high-water line, Havel said.

Biologists have identified one species of seaweed, known as wakame, that is native to Japan and has established in Southern California but has not yet been seen in Oregon, he said.

The dock tested negative for radiation, which was to be expected if the dock broke loose before the nuclear power plant accident triggered by the waves, said Havel.

Chapman said the dock float was covered with masses of algae, kelp, barnacles, mussels and other organisms.

"This is a whole, intact, very diverse community that floated across from Japan to here," he said. "That doesn't happen with a log or a thrown-out tire. I've never seen anything like this."

Of particular concern was a small crab that has run wild on the East Coast, but not shown up yet on the West Coast, and a species of algae that has hit Southern California, but not Oregon. The starfish, measuring about three inches across, also appears to be new to U.S. shores.

"It's almost certainly true that most of the things on this have not been introduced to this coast yet," Chapman said. "We're going to see more of these things coming." [...]

Too bad the critters had to survive all that way, just to be exterminated when they got here. Oh well. I guess it was the lesser of two evils.

As for more to come, follow the link and look at the spread map. Yikes!
We ain't seen nothing yet. And the potential for more invasive species arriving looks like it will grow.