Save the S.S. United States from the scrap-heap

I was gonna do a post about this great old ship a few years back, when they were planning to refurbish and relaunch her. But it seems that bringing her up to modern code proved to be too cost prohibitive; those plans all fell through. Now she is in a fight for her life: 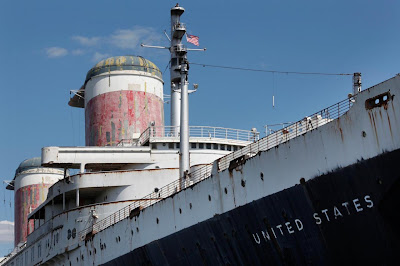 
The SS United States is sending out what may be its final distress call.

The 990-foot-long ship could be sold for scrap within two months unless the grass-roots preservation group that's working to secure a home and purpose for it can raise $500,000 immediately, the group told The Associated Press. Talks are under way with developers and investors about the ship's long-term future, but without the emergency funding, its caretakers fear they will run out of money before a deal is inked.

The historic ocean liner carried princes and presidents across the Atlantic in the 1950s and 1960s but has spent decades awaiting a savior at its berth on the Philadelphia waterfront.

"We've made progress on the fundraising side and the redevelopment side," said Susan Gibbs, executive director of the SS United States Conservancy and granddaughter of the ship's Philadelphia-born designer, William Francis Gibbs. "Our immediate goal is to buy some time."

The group has raised $1 million through fundraisers and a website, where contributors can sponsor a piece of the ship for $1 per square foot, but has received no public funding. What is desperately and immediately needed, they said, are donors with deep pockets and high profiles.

"Are we giving up on successfully redeveloping the ship as a self-sustaining entity? Absolutely not," said Dan McSweeney, head of the redevelopment efforts. "We continue to have active discussions with potential partners, we have ideas of potential sites for the ship, but we need more time to get it off the ground ... and we're running out of runway."

It costs $80,000 a month just for mooring, basic maintenance, insurance and security, he said.

The conservancy is exploring potential partnerships with four entities in Philadelphia and New York City to refashion the vessel as a stationary entertainment complex with 500,000 square feet of space for a hotel, theater, restaurants and shopping. The sluggish economy and other factors have slowed negotiations, McSweeney said.

As talks continue, he said, the hope is to convince corporate sponsors, influential politicians and prominent business leaders — are you listening, Donald Trump and Michael Bloomberg? — to lend their political and financial capital to the effort.

"Any way you look at it, there is no downside to this project," McSweeney said. "It's an economic and community development project that's going to create jobs."

The SS United States carried more than 1 million passengers at record-breaking trans-Atlantic speeds over the course of 400 round trips from 1952 to 1969, among them President John F. Kennedy, Prince Rainier of Monaco, Salvador Dali and Elizabeth Taylor. A joint venture between the Navy and ship designer Gibbs & Cox, the luxury liner was made with hidden military might: It could have been converted in a single day to transport 14,000 troops for 10,000 miles before refueling.

After being decommissioned it changed hands multiple times, from the Navy and on through a series of restoration-minded investors.

It was towed from Virginia to Turkey to Ukraine, finally arriving in Philadelphia as a gutted hulk in 1996. Another succession of developers and a cruise lines failed to return the ship to service as retrofitting costs proved too great. [...]

I remember reading about this ship when I was a kid, I was a real fan. Our local library had and encyclopedia, that had a three panel color fold-out of a cutaway diagram showing all the inside parts and levels of the ship. I had a model kit of the ship that I built and painted. It was the greatest ocean liner ever.

How ironic that it can't be brought up to "modern" standards. It was not unsinkable, but it was hard to sink. It had five chambers. Even if all 5 chambers were to flood, up to the waterline, it would still not sink. Compare that to modern cruise ships, that have only two chambers. And their "modern" propensity to break down at sea and become floating toilets.

The hope now is to turn the ship into a permanently docked museum/hotel/office space/restaurant/conventions center complex. It seems like a worthy venture. We once visited the RMS Queen Mary in Long Beach, California. It had been converted thus, and it was a very enjoyable visit. I would love to see that happen for the S.S. United States, since it can't be allowed to compete with our modern floating toilet bowls.

Here is a video about the ship. It's part of a series, I think I shall try to post one a week, for the next several weeks.