Will the Middle Class Survive?


Off the top of your head, how many of your friends can you think of make less than $11,000 a year? Maybe they work some mind-numbing part-time job, taking cover charges and stamping hands at a strip club. Or if you're a bit older, how many families do you know of who have one person working, bringing in less than $23,000 to support a spouse and a couple of kids? There's nothing wrong with either of those things ... but those numbers are the poverty threshold in the U.S., and in my area of the country, it encompasses a fudging poopload of people (sorry, I'm trying to cut down on my cursing).

Poverty is a hot topic for politicians, but it seems like every time they open their mouths about the subject, stupid falls out. There's a huge part of me that wants to grab them by their orphan skin lapels and scream reason into their preciously oblivious brains, but the logical side of me knows it won't matter.

But of all the poor people I've known over the years -- and I have known a lot -- I have come across very few able-bodied, able-minded people who didn't do something to bring in some money. Even the ones who didn't have so much as a part-time job still managed to at least find temporary seasonal work mowing lawns, shoveling snow, or standing on street corners and playing the guitar with their penis.

So if the issue is that these people are watching reruns and collecting government checks, guess what: 91 percent of government benefits go to the disabled, elderly, or working households. Not a typo -- 91 percent. You're free to speculate that some of those people could try harder or are faking their disability or whatever, but there's no way the reality lines up with this politician fantasy of the lazy masses who just greedily rub their hands together while leeching their unfathomable riches from the always generous American populace.

OK, let's be calm here. Let's just take a deep breath and talk about this like the rational, well mannered, non-cursing people that we are. Here is an infographic that ran in the Wall Street Journal talking about how the new tax code would be "highly painful" for Americans. The graphic covers every possible scenario the Wall Street Journal can conceive of, from the single mom only making $260,000 a year to the retired couple trying to get by on a fixed income of $180,000: 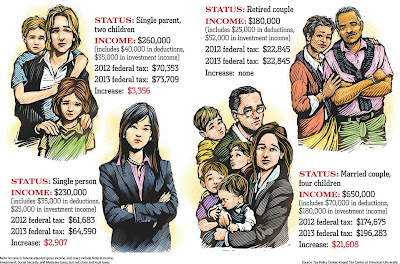 Reading that dumb fucking mind turd of an image is like wiping my ass with my eyes. If you can look at that steaming pile of shit and not see what's wrong with it, you live in a different goddamn universe than the rest of us.

No, that didn't come from a politician, but this sure as hell does. That's Linda Sanchez, who is desperately trying to tug at our heartstrings by saying that she lives paycheck to paycheck. On her $174,000 salary. To pay for her multiple homes. Now, I understand that if you live a certain lifestyle and you're a limp dick at finances, it would be pretty easy to burn through that much in a year, but does that make us any more sympathetic? Fuck no, it doesn't. Even as one of the least wealthy members of Congress, she still earns three-and-a-half times more money than the average American household. And 16 times more than those at the very top of the poverty line.

So the question is, how can she possibly think of herself as poor? Because $174,000 a year is poor -- for a member of congress. They have no concept whatsoever of what life is like for someone getting by on what most working people make, let alone somebody subsisting on government aid. Although they can comprehend our income as a number, they cannot comprehend the lifestyle because they haven't lived it and they likely never will. You're not going to find these politicians hanging out in the poor section of town, scrounging change for weed (well, maybe Bill Clinton) -- they spend most of their time around other wealthy people -- other members of Congress (about half of which are millionaires), rich donors, high-powered business types, celebrities, etc. So their idea of "poor" or even "brokeass" is the pitiful bastard at the bottom of the chain who is living off of that measly $174,000 base salary because he or she doesn't have any other income on the side. Linda Sanchez is their version of poverty. [...]

My own income has always been a lot closer to $11,000 than those figures in the Wall St. Journal Info Graphic. And yes I get it, that a lot of people aren't sympathetic to people who make six figure salaries, complaining about taxes.

Yet that graphic was from an article in the Wall Street Journal last year. This year, 2014, many of those groups are getting slammed even harder with more taxes.

People in those income brackets used to put away money for their children's college education, buying a home, buying their own health insurance, saving money in 401k accounts for their retirement, invest in their own businesses in order to supply themselves with jobs and an income. They would use the money to become independent, and maintain their independence, by not having to borrow excessively, or rely on others to supply their needs for them.

That used to be considered a good thing, and why it used to be said that the middle class was the "backbone of America". They knew how to take care of themselves, and not be a burden to other people. The more of their money that is taken in taxes, the less they will have to do that with. Or to invest in their own businesses.

I can sympathize with people who struggle with only $11,000 a year. I've been there, and I'm not far from it now. But destroying the middle class isn't going to help the most people in the long run. A tide that lifts all boats, would be preferable to sinking the most productive boats.

A congress that is more interested in lifting all boats, instead of just looking out for it's own interests, might be a good step in the right direction. They could start by actually passing a budget, and living within it, like the majority of the people in this country have to do.