Nkandla style – don’t worry, it is for security


In March 2014, public protector Thuli Madonsela found that president Jacob Zuma and his family unduly benefited from upgrades made to his private Nkandla homestead, which cost the taxpayer around R246 million.

According to the public protector’s report titled “Secure in Comfort”, government built a visitors centre, cattle kraal and chicken run, swimming pool and an amphitheatre for the president and his family in his private home.

Madonsela said that this clearly shows that Zuma and his family unduly benefited from the upgrades. However, government had a simple explanation for it all – security.

Justice Minister Jeff Radebe said that the cattle kraal, fire pool (seen by some as a new swimming pool) and all other features are “essential security features which ensures physical security and effective operation of security equipment.”

In fact, security is such an elegant excuse when explaining questionable decisions that it should not come as any surprise that this excuse has been used by government previously. [...]

Lookit that Chicken Coop. A real work of art, that. Would love to see it close-up. 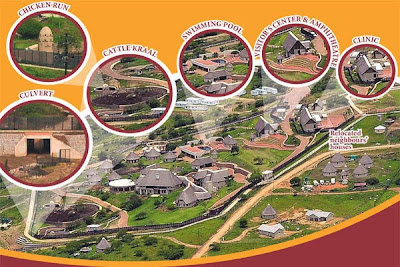 What Nkandla’s millions could have bought South Africans


Public Protector Thuli Madonsela released the Nkandla report this week, which showed that the estimated total cost of improvements to President Zuma’s Nkandla home is R246,631,303.

Madonsela’s report found that the total cost of the Nkandla project included:

According to the public protector’s report a critical service delivery program was shelved and money diverted to upgrade Zuma’s homestead.

“Funds were reallocated from the inner city regeneration project and the dolomite risk management programme of the department of public works,” Mandonsela said in her voluminous report.

“Due to lack of proper demand management and planning, service delivery programs of the department of public works were negatively affected.”

The homestead has been at the centre of controversy after it emerged that the public works department had approved upgrades to the President’s KwaZulu-Natal homestead.
What could the Nkandla money have been better used for?

South Africa can benefit tremendously from better IT infrastructure, a more connected society, and better education.

Here is what the money spent on the Nkandla upgrades could have bought South Africans: [...]

Ouch. A long list. I wonder what affect, if any, it will have on the next election?