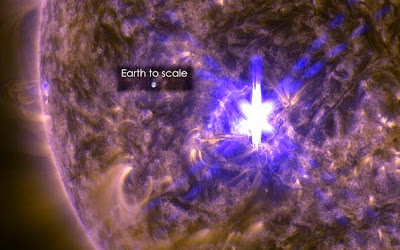 
[...] What’s particularly interesting about this week’s eruptions is that the parent region is now near the center of the sun as we look at it, and it’s likely that a coronal mass ejection (CME) is now headed toward Earth thanks to the X2 flare.

Region 2297’s earlier eruptions occurred when it was in a less central position, so the launched CME would be, at worst, a side swipe for Earth’s magnetic field. The event on the afternoon of March 11, though, is much more likely to hit nearly head on.

High-latitude aurora watchers take note — the Space Weather Prediction Center is looking for minor magnetic storm activity on March 13. Plus, the sky will be relatively dark with the moon in its last quarter, so lunar light pollution is minimal. Get away from city lights for your best chance of seeing a glow.

The days following may be even more disturbed if Region 2297 has more in it.

The Ides of March? The Roman soothsayers made dire predictions for Caesar. For us, just a head’s up that some nice northern lights may be coming.

Follow the link for a larger photo. I like how they put the earth on there, for scale. The flare itself is much larger than our small world.

If you are science-minded and want to monitor the progress of this sunspot, you can do so here.