Why the Alawites in Syria Supported Assad?

Could it be because they didn't want to surrender to the Sunni majority which historically has persecuted them, and because the Alawites can't form a state of their own, even if they wanted to? Consider this:

Five Reasons Why There Will Not Be an Alawite State


Will the Alawites try to establish an Alawite State centered in the Coastal Mountains?

Many opposition figures and journalists insist that the Alawites are planning to fall back to the Alawite Mountains in an attempt to establish a separate state. This is unconvincing. Here are the top five reasons why there will not be an Alawite State. 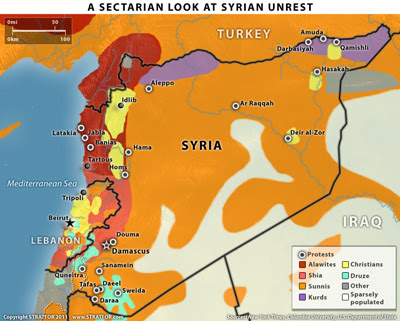 1. The Alawites have tried to get out of the mountains and into the cities. After the French conquered Syria in 1920, the earliest censuses showed a profound demographic segregation between Sunnis and Alawis. In no town of over 200 people did Alawis and Sunnis live together. The coastal cities of Latakia, Jeble, Tartus and Banyas were Sunni cities with Christian neighborhoods, but no Alawi neighborhoods. Only in Antioch did Alawis live in the city and that city was the capital of a separate autonomous region of Iskandarun, which was ceded to the Turks in 1938. In 1945 only 400 Alawis were registered as inhabitants of Damascus. Ever since the end of the Ottoman era, the Alawis have been streaming out of the mountain region along the coast to live in the cities. The French establishment of an autonomous Alawite state on the coast and their over-recruitment of Alawis into the military sped up this process of urbanization and confessional mixing in the cities of Syria. Assad’s Syria further accelerated the urbanization of the Alawites as they were admitted into universities in large numbers and found jobs in all the ministries and national institutions for the first time.

2. The Assads planned to solve the sectarian problem in Syria by integrating the Alawites into Syria as “Muslims.” They promoted a secular state and tried to suppress any traditions that smacked of a separate “Alawite” identity. No formal Alawi institutions have been established to define Alawi culture, religion or particularism. They did not plan for an Alawi state. On the contrary, the Assads bent over backwards to define Alawis as main-stream Muslims, Bashar married a Sunni Muslim in an attempt at nation-building and to stand as an example of integration. He claimed to promote a “secular” vision of Syria. [...]

And you have to wonder if a deeply religious segment of the Sunni population took offense at Assad's "secular vision" for Syria? The same segment that later joined IS/ISIS/Daesh? I say "wonder" because I'm sure there were lots of contributing factors that lead to the Syrian civil war, and I don't pretend to know or understand them all. The whole of Syrian history and it's complex politics is far more than I could ever hope to cover here in a blog post.

The article was published in July of 2012. There is much commentary and embedded links after it, talking about the civil war they could see was coming. Read the whole thing for the other 3 reasons against their being an Alawite state, and the detailed commentary, articles and links that follow.

They saw it coming, and couldn't stop it. Can it even be fixed now? Where would you even start? It's sad for all concerned.

You can read more about the Alawite religion here. Some history and politics too.