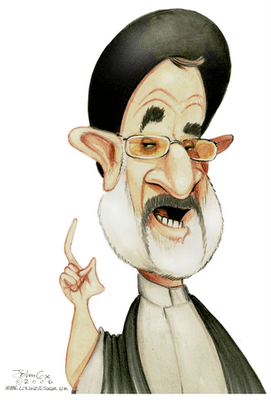 Torturer of Iranian Students addresses Harvard on the subject of "Tolerance"
Yet more proof that our universities are... "overly sympathetic" to Islamic fascism? Harvard invites one of the creators of Hezbollah as a guest speaker. Here are some of Cox & Forkum's excerpts, this first one from The New York Sun editorial page: Khatemi at Harvard:

The John F. Kennedy School of Government at Harvard University, fresh from having established itself as a headwater of anti-Israel agitation, is choosing to mark the fifth anniversary of the terrorist attacks in an astounding way — by hosting Mohammed Khatemi, a former president of Iran, an enemy state levying a terrorist war against America. Mr. Khatemi has been invited to speak on, of all things, "Ethics of Tolerance in the Age of Violence." The title insults the intelligence of all those who would attend. What in the world is a man who presided over the July 9, 1999, crackdown on Tehran University, where hundreds of students were arrested and tortured, doing speaking about "tolerance" at a university? ...

Oh, wait, I know! He's going to bash Bush, and we all know that's the most important thing. Who cares if he ordered the torture of Iranian students, and the murder of the political opposition? Don't let those pesky facts get in the way. An excerpt from Front Page Magazine, Just Say No to Khatami by Ken Timmerman:

Just one year into his term, his intelligence service murdered in horribly brutal fashion Darioush and Parvaneh Forouhar, leaders of the Iran Nation’s Party, then the best-organized opposition in Iran. The following year, Khatami quashed the student rebellion that began at Tehran University among INP members and sympathizers including Marzeporgohar (Iranians for a Secular Republic) and quickly spread to 18 other cities across Iran.

That was just the beginning of a crackdown on domestic dissent that occurred on Khatami’s watch and on his orders. ...

In 1984, as minister of culture and Islamic propagation, he presided over the creation of Hezbollah, Iran’s proxy army of terrorists in Lebanon and elsewhere. He thought that was exactly what the Islamic Republic of Iran needed to do to expand its influence around the world.

As president, Khatami never opposed Iran’s development of nuclear weapons technology, or long-range ballistic missiles to deliver them. On the contrary, it was on Khatami’s watch that Iran accelerated its once-secret nuclear weapons development, and flouted its success to the International Atomic Energy Agency.

(bold emphasis mine) All things considered, isn't he the perfect person to be comming to the USA to talk to our students about "tolerance"? I guess it's a lesson on tolerating Islamic fascism, thanks to Multi-culturalism, political correctness, and the leftist faculty at Harvard. I hope they don't forget to thank Khatami for helping to create Hezbollah, a terrorist organization that has killed many Americans.

HT to Cox & Forkum for the cartoon, you can read the rest of their excerpts and links on this subject HERE.
Posted by Chas at 8:45 AM

Do we need any more proof that the college liberals are insane?