Khatami and Tolerance: the Irony 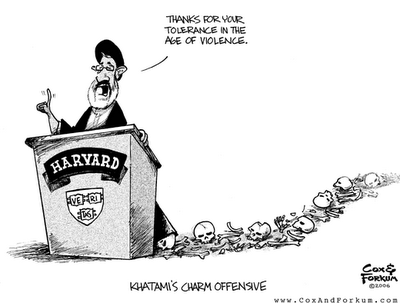 Hat tip to Cox and Forkum for the cartoon. You can read their related commentary and links HERE. Here is one of their excerpts:

From The American Thinker: Welcome to the Land of the Great Satan, Smiling Mullah by Amil Imani. (via Iran Press News)

1. Thousands of dissident students, intellectuals and journalists were systematically arrested, imprisoned and tortured for the sole crime of speaking up against the repressive rule of the mullahs. Many are still languishing in prisons, some have died, and some have simply vanished with no records of what happened to them.

2. During this turbaned fascist’s watch, many students’ lives were extinguished for daring to express their opposition to the stone-age regime. Shamelessly, during the 9 July of 1999 students demonstration, for instance, this man called the Tehran university students “A bunch of hooligans,” while his storm-trooper hooligans, with police support, brutally attacked students in their dormitories throwing some students out of the windows of the dorm’s third floor. Now, he is welcomed at Harvard University to lecture its “hooligans” and faculty on practicing tolerance.

4. Prisoners of conscience were routinely tortured to extract confessions about the crimes they did not commit. Some of the victims were permanently incapacitated while others died under the brutal torture.

Meanwhile, what has Khatami had to say so far? From AP via The Register-Guard: Khatami uses visit to bash Bush.

(bold emphasis mine) This is only a partial list of atrocities this man is responisble for. To see the entire list, visit the link to The American Thinker: Welcome to the Land of the Great Satan, Smiling Mullah by Amil Imani.

The Cox & Forkum post also has exerpts from several other articles about this fascist Mullah, pretending to be a peace dove, so he can try to undermine support for sanctions against Iran. C.A.I.R. of course, is supporting him in this, presenting him as Iran's first Reformist President. Talk about spin. If Khatami is a reformist, then just imagine what the rest of the Mullahs must be like.

Massachusetts governor Mitt Romney has forbidden state agencies to provide any escorts or support for Khatami, if requested. Good. I just wonder why our state department has even agreed to let him into the country? If you want to understand why Harvard even invited him, check out the links at Cox & Forkum. 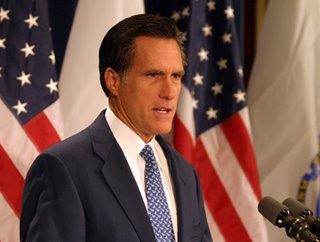 ...Romney criticized Harvard for honoring Khatami by inviting him to speak, calling it “a disgrace to the memory of all Americans who have lost their lives at the hands of extremists, especially on the eve of the five-year anniversary of 9/11.”

Said Romney: “The U.S. State Department listed Khatami’s Iran as the number one state sponsor of terrorism. Within his own country, Khatami oversaw the torture and murder of dissidents who spoke out for freedom and democracy. For him to lecture Americans about tolerance and violence is propaganda, pure and simple.”

Romney cited a litany of hateful actions by Khatami, including his support for violent jihadist activities:
...

(bold emphasis mine) Someone's gotta say it. The Governor doesn't mince words. Good for him.

*Anti-CAIR* Defending America against the Council on American-Islamic Relations