We can't even buy .22 ammo anywhere in town, everywhere is out-of-stock. And it seems it's like that all across the country:

[...] Much of the demand comes from continued high law enforcement demand, the same demand that led to shortages two years ago. Police agencies around the nation have become more militarized in recent years and two trends within this militarization have led to greater police ammunition demand.

Law enforcement agencies have been rapidly increasing their ammunition consumption because of how they are rearming, causing a permanent increase in demand. Just as ammunition manufacturers began to cope with that increase, a second run, based upon a downward-turning economy and rising fears of laws targeting gun and ammunition, dramatically expanded demand yet again.

Shortages of ammunition and firearms can be expected to continue for as long as it appears our overreaching federal government is a threat to our individual liberties, our economy continues to falter, and our police agencies keep militarizing. [...]

The article does give details to support both of these explanations. It also says manufacturers are struggling to meet the demand. What I want to know is, when will I see ammo on the shelves again?

[...] At Farm & Fleet, notices are posted on the ammunition shelves apologizing for the shortage and saying it is because of high customer demand and the inability of manufacturers to meet orders. A portion of the shelf space usually holding cartridge boxes is now holding other items. Even usually plentiful .22-caliber ammunition is scarce.

Skartveit said he has supplies of shotgun shells and .22-caliber cartridges, but is having problems stocking handgun and assault rifle-type ammunition. Further, he also is finding it difficult to get supplies, such as primers and lead bullets, for those who reload their own cartridges instead of buying factory-made cartridges.

"Last week I called the largest distributor in the country and they laughed at me," Skartveit said. "They said they don't know when they'll get more in. They have 450 salesman in the country who don't have anything to sell. I have people wanting ammo for handguns and I can't get it for them." [...]

I'll bet there are some Democrats who want exploit the situation, by making ammo and ammo materials hard to obtain. If they can't take people's guns away, they will try to stop and/or control the ammo, with creepy things like "Encoded Ammunition" (Bullet and Cartridge Case Serialization).

There are many reasons to strenuously oppose this legislation:

Reloading (re-using cartridge cases multiple times) would be abolished. There would be no way to correspond serial numbers on cartridge cases, and different sets and quantities of bullets.

People would be required to separately register every box of "encoded ammunition." This information would be supplied to the police. Most states do not even require registration of guns. Each box of ammunition would have a unique serial number, thus a separate registration.

Private citizens would have to maintain records, if they sold ammunition to anyone, including family members or friends.

The cost of ammunition would soar, for police and private citizens alike. The Sporting Arms and Ammunition Manufacturing Institute estimates it would take three weeks to produce ammunition currently produced in a single day. For reason of cost, manufacturers would produce only ultra-expensive encoded ammunition, which police would have to buy, just like everyone else.

A tax of five cents a round would be imposed on private citizens, not only upon initial sale, but every time the ammunition changes hands thereafter.

Criminals could beat the system. A large percentage of criminals' ammunition (and guns) is stolen. Criminals could also collect ammunition cases from shooting ranges, and reload them with molten lead bullets made without serial numbers. [...]

In so many ways, these new ammo laws are just another way of disarming private citizens: 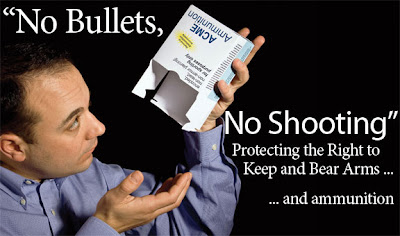 No Bullets, No Shooting!.

All of these bills would prohibit the manufacture and sale of ammunition, unless the bullets and cartridge cases are marked with a code and registered to the owners in a computerized database. Most would also require gun owners to forfeit any non-coded ammunition they possess. For example, Arizonas bill says, “Beginning January 1, 2011, a private citizen or a retail vendor shall dispose of all noncoded ammunition that is owned or held by the citizen or vendor.” Tennessee’s says, “All non-coded ammunition . . . shall be disposed.” And in Pennsylvania, “An owner of ammunition . . . not encoded by the manufacturer . . . shall dispose of the ammunition.”

The point of these bills is to prevent gun owners from having ammunition for defense, practice, sport and hunting. The fact that these bills are not gun bans is a mere technicality because, in practical terms, ammo bans are gun bans.

That isn’t the end of the anti-gunners’ attacks on ammunition in the current Congress and state legislative sessions. Ammunition bans are taking almost as many legislative and regulatory forms as there are types of ammunition to outlaw. [...]

The article goes on with a lot more details, about current legislation, and the people and history behind it all. This is a real fight, folks.

The "un-sexy" Truth About the Ammo Shortage

The war over coded ammo is still on, for sure, but the actual causes of this current ammo shortage are actually rather mundane and easily explained.

Much thanks to the reader who sent me the link to the article I used in my update.

Looks like its time for me to learn how to reload my own ammunition and buy lots of lead.

The time to act is now. We need to contact our local Sheriff, and see how they feel about the current climate of gov't. He/She is our last line of defense in this country. If he/she doesn't uphold their oath to "Support and defend the Constitution of the U.S." we are on our own.

As a plan B, we should be creating a network of communication to insure the supply of food, ammo, and shelter. We need to know who our friends are.

Ben Franklin said" If we don't hang together, we will surely hang seperately."

You can not trust anything the media or the lying gov't officals tell you. Find out for yourselves. Use your own brain. You will know when things aren't right.

My hope through all this mess, is that this country will wake up and realize that we are quite possibly the last generation that knows anything about what the Constitution says or means.

It is our duty to insure that our children understand that it isn't just an old peice of paper, but what this country is founded on. It is our duty to hold our elected officals accountable for their actions and vote them out. (Feinstein, Boxer, Shumer) to name a few.

They want to take our country away and give us "peace and safety". Just remember this:

LIBERTY! You can't have freedom without it.