He's alive. And where is the "wonderful"? 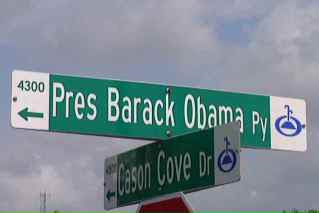 [...] Most roads that are constructed are paid for with taxpayer dollars, but the fact that the first new road named after Barack Obama is being funded by his beloved “stimulus” is only appropriate.

If you’re in Orlando looking for this road, it’s just a mile west of the intersection of Hope and Change, and a half-mile east of the corner of Shovel and Ready. Why did local officials decide to name the stimulus road after the president? Because “A Blatant Attempt to Bankrupt America Boulevard” wouldn’t fit on the sign. [...]

Remember when people used to get things named after them, only after they were dead? And only if they had achieved something wonderful?

So far as I know, Obama is still alive. And as for the wonderful, I'm still waiting.