Whatever happened to GEOS by Berkley Softworks? LOTS of things...

Here is a trip down memory lane for Commodore 64 users who used GEOS software:

[...] The Graphical Environment Operating System was released in 1986, created by Berkeley Softworks: a small company start-up by serial entrepreneur Brian Dougherty. GEOS is a classic Mac like GUI running on Commodore 64 / 128 hardware, then later the Apple II, and PC.

Even though Berkeley Softworks started out small, with only two salespeople, the new software proved very popular because of low price for the necessary hardware (and of course the capability of the OS). This was due in part to the aggressive pricing of the Commodore 64 as a games machine and home computer (With rebates, the C64 was going for as little as $100 at the time). This was in comparison to an atypical PC for $2000 (which required MS-DOS, and another $99 for Windows 1.0) or the venerable Mac 512K Enhanced also $2000.

In 1986, Commodore Business Machines announced the C-Model revision of the Commodore 64 in a new Amiga-like case (dropping the 'breadbox' look), and bundling GEOS in the US.

At its peak, GEOS was the second most widely used GUI, next to Mac OS, and the third most popular operating system (by units shipped) next to MS-DOS and Mac OS.

GEOS came at a time before the world wide web, before home computers were PCs, before mass storage that you could afford, and long before Bill Gates and Windows were No.1.

GEOS did not pioneer the GUI; most of its features were already present in the larger OSes of the day, like the classic Mac (albeit, not Windows). What GEOS did show is that cheap, low-power, commodity hardware and simple office productivity software worked. You did not need a $2000 machine to type a simple letter and print it. This gave some sense of perspective in the heady 'Golden Age of Computing' of the 80s and even now, as some alternative OSes struggle to port bloated software from other platforms.

Many OSes can claim all sorts of things, and in-fight over who invented what- first. GEOS helped drive the proliferation of the newfangled GUI concept to regular users without the need for the famous Apple Hype Machine (likely one reason why GEOS is now all but forgotten).

GEOS was able to introduce home users to Point & Click, Cut / Copy / Paste, WYSIWYG Word Processing and what you expect from a GUI without having to afford an expensive Mac or PC with Windows. Before GEOS, the home user had to go to work to even see a GUI.

Then there was GEOS on the PC (more about this at the end of the article), which had the Start Menu concept two and a half years before Windows, and a PDF-like UI model 10 years before Mac OS X ;) [...]

It's a long article, and it goes on about the history, what happened, to both the software and company. There are still people using GEOS on old C64's, and the old GEOS even kept evolving on the C64, even having a web browser called "Wave". It was supported by a company called CMD, right up until 2009. The article contains details and links all about it.

One can even download and use the old GEOS sofware on a modern PC, using C64 emulator software: 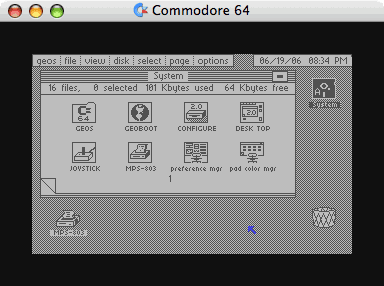 The article is full of screen shots. Gosh, the memories it all brings back!

It goes on to tell how GEOS evolved into GeoWorks for the PC, and how they resisted being assimilated by Microsoft, only to be crushed by them later. The software rights were bought and sold several times, it seems. A small version of GEOS still lives today, on cellphones and handheld devices. The article continues:

[...] Anybody can wax lyrical about 'what could have been', at the end of the day GEOS, both Commodore and PC versions, were genuine technical masterpieces in their own right - involving great skill. They stood true to being an affordable OS, that got the most power out of the least hardware. GEOS might not be an Open Source system but just because it's commercial, that does not negate the clear love for engineering that went into it.

Sure GEOS is all but forgotten now, but that doesn't mean it didn't contribute to what helped shape computer usage in the 80s and 90s. Considering that even an OS as popular as GEOS was can fade away, then there is no accuracy or inaccuracy in waxing lyrical that even Microsoft could be entirely forgotten one day in the far future. These things happen.

I love Commodore/GEOS because it represents something that no longer exists in the computer industry anymore. The Commodore 64's hardware is (programatically) beautifully designed. It is possible for one person to know the entirety of the machine, every function, every chip, every quirk. This gave the individual the power to create almost without limits, as shown by the continual modern day upgrades of the C64 and the popular demo and music scene. Today's hardware is just too complex to fully understand the whole system. Only a small percentage of the PC's actual power is ever used because of a rapidly moving platform that solves problems by throwing more hardware in. [...]

Yes, it came at a unique time in history. It made computing affordable for many people who otherwise would have never had the opportunity to own and use their own personal computer, until many years latter. And it really showed the world how much could be done, with so little.

I posted earlier about how the Commodore Brand is attempting to make a comeback: "The Commodore 64 goes Back to the Future".

The new company plans on using a new Commodore OS, based on the Linux operating system. I'm all for it, and hope it goes well. It will be fun to see how it works out, and even more fun if it succeeds. Yet I will still miss the old days of computing, when it was a new frontier. It was a unique time, and won't ever be quite that way again.

I wish! But every time I take one of those on-line "Test-Your-Geekiness" tests, it always says the same thing; that I'm not a REAL geek, but just a geek wanna-be.

GEOS was the best program I ever owned. Best for doing drawings and simple to use, used it up until about 1999, then the computer crashed. Had a friend, I would guess about 1985, tell me that Windows O/S will never make it, don't buy into it. I remind him every so often.

This individual in 1998 programmed a new update to GEOS 2.0 called:
Wheels OS for both the C=64 and C=128 called: Wheels OS. With Wheels the C=64/C=128 needs some sort of Memory REU for extra Ram.
Wheels has a new way of setting up disk drives called: Toolbox, allowing 4 drives at a time, also supporting all CMD related drives:
CMD HD, CMD FD2000, Ramlink.
Wheels also supports the CMD Super CPU accelerator that runs at 20MHZ (CPU accelerator). The SCPU breathes a new life into GEOS and Wheels makes it faster.
The programmer for Wheels also improved on Geo Programmer, fixed all bugs within Geoprogrammer, renamed it: Concept and Concept+.
Concept was the first improvement for fixing all GeoProgrammer bugs, Concept+ supports the Super CPU and lets you program 16-bit apps, etc.
Concept also lets you link all Commodore 6502 Hex and assembly code. Sadly the individual listed seems to no longer support CMD products and GEOS, but he has a free download for GEOS 2.0 with a disclaimer on his website. So Commodore GEOS is not totally dead and still available. Wheels OS it seems that Click Here Software may not sell that much anymore, but that is up to the owner.
So GEOS/Wheels OS is still alive but the Wheels update hasnt been updated for about 7 years.

Thanks for the breakdown of the history.

GEOS/Wheels might still be alive, but without an update for seven years, it looks like it's not going anywhere anymore. I fear it's window of opportunity has come and gone.

If I had the time, I would write an update to GEOS/Wheels... I've often had great fun writing cool stuff for older OS's - sometimes just to show off - what 'could' have been done, to keep the spirit alive, and for fun! - Bryan - bsillman@hotmail.com