Amateur Radio Officer in Kabul will be Missed

I heard about this attack in the news. And as sometimes happens, I later read in the ham radio news that one of the people involved was an Amateur Radio operator. 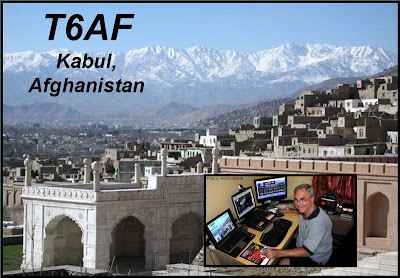 04/27/2011
James McLaughlin, WA2EWE/T6AF, was one of several Americans killed in Kabul, Afghanistan on Wednesday, April 27. News sources say that eight American troops and a US contractor died Wednesday after an Afghan military pilot opened fire during a meeting in an operations room of the Afghan Air Corps at the Kabul airport -- the deadliest episode to date of an Afghan turning against his coalition partners, officials with the NATO-led International Security Assistance Force (ISF) in Afghanistan said. McLaughlin -- a retired US Army Lieutenant Colonel -- was a contractor serving as a flight instructor for Afghan pilots.

Licensed since 1972, McLaughlin was a career US military officer. Bob Magnani, K6QXY, told the ARRL that McLaughlin was just in the US a week ago, visiting his family: "His son Adam, KD6POE, works for me. He told me that his dad had been in Afghanistan and Iraq many times over the past few years, most currently serving as a flight instructor.” McLaughlin posted on his qrz.com page that “almost every day, I operate at around 1230 - 1430 UTC. Sometimes I am QRV until around 1500 UTC.”

Voice of America Correspondent Steve Herman, W7VOA/T6AD/HL9OA -- currently in Seoul, South Korea -- remembers meeting McLaughlin for the first time. “I first met Jim in August 2009 when we were the only two hams operating in Kabul,” he wrote in an e-mail. “We exchanged tips on operating in our unusual environment. Jim had put together a fine radio shack in his quarters and was especially enthusiastic about his RTTY and PSK capabilities, as well as the ladder line-fed wire dipole he had managed to string up at a height of 50 feet through some trees.

“Less than 24 hours after our initial discussion, a suicide bomb went off in Kabul near the spot where we had arranged to meet. The blast killed seven people and injured nearly 100. The explosion site was also close to Jim’s QTH and it blew out windows in his residence adjacent to the US Embassy. It was obvious from spending time with Jim that ham radio was an important morale-boosting pastime and he usually spent a couple of hours per day QRV, logging thousands of QSOs” As of March 26, 2011, McLaughlin had logged 4359 QSOs, most of them on RTTY and PSK.

McLaughlin was also an active MARS operator. “He was one of our most dedicated MARS members in Army MARS Region 11,” Dan Wolff, KA7AGN/DL4VCW/AEM1WF/AEA1RD, told the ARRL. Wolff is the MARS Region 11 Director. “He relayed and delivered literally hundreds of MARSgrams every year for our region. I’ve known him for many years and he was always devoted to supporting our deployed service members. He will be deeply missed on MARS circuits and the ham bands as well.” -- Thanks to Russ Bentson, K6KLY, CNN and Fox News for the information

A brave man, and so much to admire about him. My condolences to his family.

The photo is from his page listing on QRZ.com. You can do a search there for his call sign, to see his page.